What you believe depends on where you stand, apparently.

Companies Are Flush With Cash---and Ready to Pad Shareholder Pockets

Can E-Fuels Save the Combustion Engine?

Position Sizing: Techniques & How to Calculate It

The Post-Covid-19 Rules of Tipping

Netflix Movies Turn Up in a Surprising Place: Theaters

One of the Pot Industry's Best Highs is Fading

Les Moonves to Forgo $120 Million in Settlement With ViacomCBS

Or, talking your book on surveys.

Political Polarization and Expected Economic Outcomes by Olivier Coibion, Yuriy Gorodnichenko, and Michael Weber is a fascinating working paper on the election.

…despite wanting different things, voters should be able to broadly agree on the likelihood of different electoral outcomes..

87% of Democrats expect Biden to win while 84% of Republicans expect Trump to win. Importantly, this stark disagreement does not reflect two sets of partisan voters each foreseeing a close election that just barely breaks their way. Among Republicans, the average probability they assign to Trump winning is 76%, with more than one in five saying that Trump will win with 100% probability. Among Democrats, the average probability assigned to Biden winning is 74%, with almost 15% of them saying that Biden will win with 100% probability. 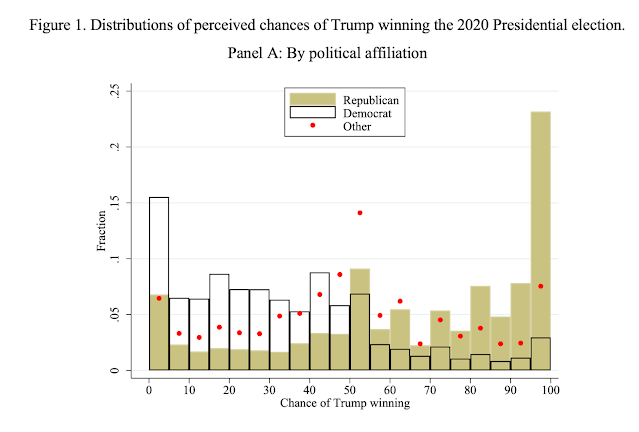 Perhaps of course that economic forecast is why each group votes the way they do, and the conditional distribution should go the other ways — given which president you think will be a calamity, you vote for the other one.

So, I can forecast with 100% probability, the libertarian revolution is coming in 2024!

The post What you believe depends on where you stand, apparently. appeared first on Market World.

Where Trump and Biden Stand on Budget Deficits