Where Is Lake Champlain? | A Travel Guide

Where is Lake Champlain? Two U.S. states, Vermont and New York, and one Canadian province, Quebec, can all lay claim to this famed body of water, which lies in its namesake valley fringed by the Green Mountains and the Adirondacks. But in proportional terms, Vermont is its true home: Of the lake’s 490 square miles, more than half are within the borders of the Green Mountain State. The biggest city on the lake, Burlington, is Vermont’s cultural capital. And many New Englanders feel it is truly the “great lake” of their region, as it dwarfs Maine’s 118-square-mile Moosehead Lake and New Hampshire’s 72-square-mile Lake Winnipesaukee. 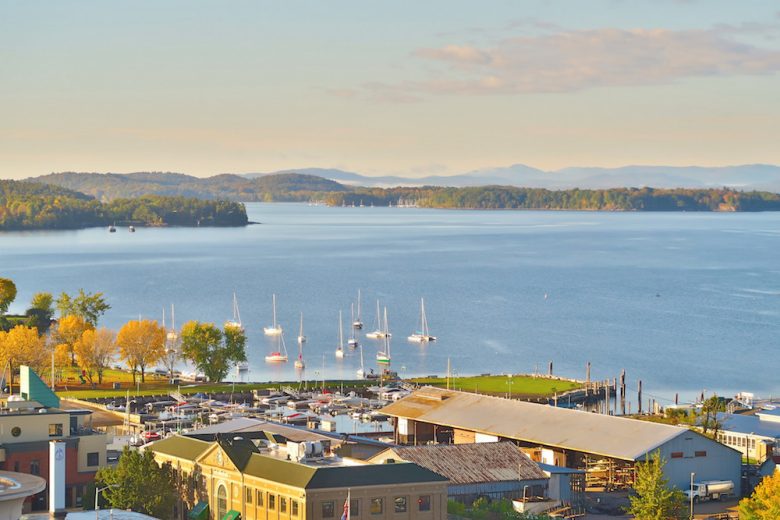 The Burlington waterfront | Where Is Lake Champlain?

Lake Champlain also looms large in historical terms. As part of a sprawling waterway linking trading centers in Canada with those in New York, it has long had immense strategic value, and it was a pivotal site in the French and Indian War, the American Revolution, and the War of 1812. That military history is reflected in a number of parks and monuments around the lake, most notably New York state’s Fort Ticonderoga, captured from the British in 1775 by state militias led by Ethan Allen and Benedict Arnold, and the Macdonough Monument, which commemorates the decisive U.S. victory in the War of 1812’s last naval battle.

Though Lake Champlain was for decades a major force in shipping and commerce, that era largely came to a close in the early 20th century as traffic shifted from boats to railroads and roadways. Today it’s best known as a recreational and cultural destination, home to more than 50 beaches and numerous state parks as well as inviting lakeside towns filled with dining, shopping, and entertainment. Ready for a visit? Read on to find out the answer to “Where is Lake Champlain?” and learn how you can get there, plus discover a few of our favorite things to do, places to eat, and places to stay.

Where is Lake Champlain? 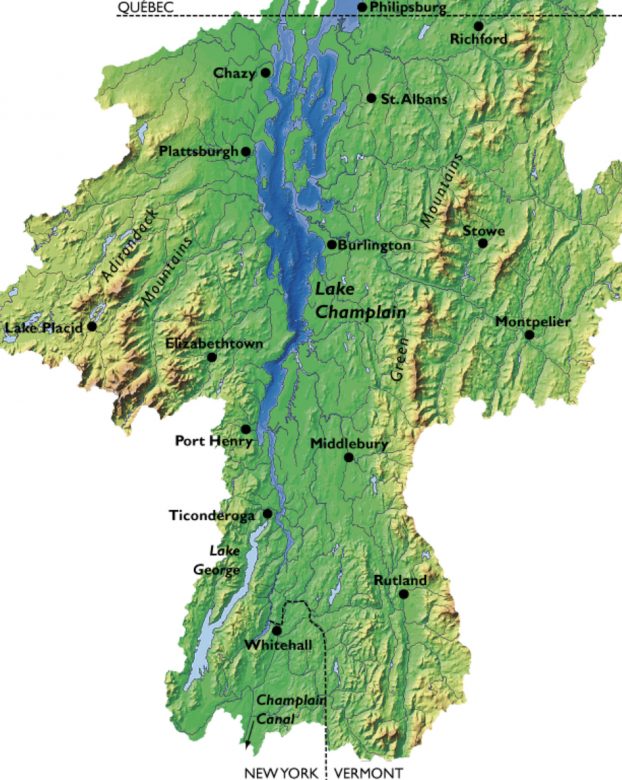 A map of the lake and its major cities and towns | Where Is Lake Champlain?

Lake Champlain is located in the northwestern corner of Vermont, straddling the New York state line to the west and the Canadian border to the north. The closest major metropolitan area is Montreal, in Quebec, roughly an hour’s drive north; New York City is about a five-hour drive south, while Boston is approximately a three-and-a-half-hour drive to the southeast. The lake itself reaches from Whitehall, New York, to its outlet at the Richelieu River in Quebec, a distance of some 120 miles — though at its widest Champlain is only 12 miles across.

The lake is divided into five geological sub-basins: the South Lake, the narrow stretch that runs north from Whitehall to Crown Point; the Main Lake, the broadest part of the lake, from Crown Point to Canada; and clustered on the eastern side north of Burlington, in the so-called Restricted Arm, the trio of Malletts Bay, the Inland Sea (or Northeast Arm), and Missisquoi Bay. Between the Main Lake and the Restricted Arm is where you’ll find Vermont’s lovely Champlain Islands: South Hero, Grand Isle, North Hero, Isle La Motte, and Alburgh (technically a peninsula).

Things to Do Around Lake Champlain

Burlington Bike Path, Burlington
Lake and mountain views abound. Head to North Beach, onward to rustic Charlie’s Boathouse, or up the Causeway through Colchester to the Island Line and Champlain Islands. Or just meander along the Burlington waterfront south to Oakledge Park. Rentals and maps at Local Motion. Named a 2016 Yankee Editors’ Pick for “Best Lakeside Biking.”

Snake Mountain, Addison & Weybridge
This 1,287-foot outlier of the Taconic range rises abruptly from the surrounding terrain to offer Vermont’s finest panorama of dairy lands, Lake Champlain, and the Adirondacks. Access the five-mile trail loop from either the west side (in Addison) or the east side (in Weybridge), and traverse a 1,215-acre preserve encompassing oak, maple, and hickory forests; a 9,500-year-old glacier-born bog; and, at the top, the ruins of an 1870 hotel. Named a 2018 Yankee Editors’ Pick for “Best Short Hike.”

Places to Eat Around Lake Champlain 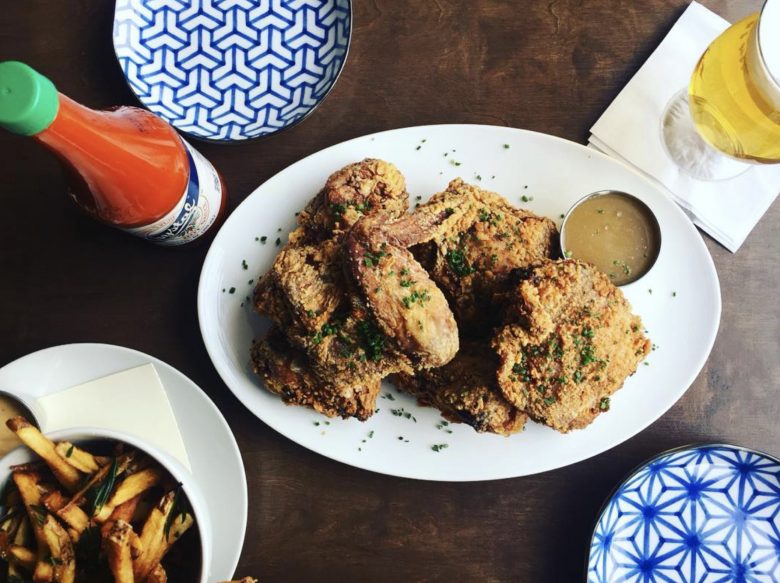 Penny Cluse Café, Burlington
Line up with locals for a table at Burlington’s most popular breakfast spot. It’s worth the wait for such treats as the “Bucket-o-Spuds” (home fries with melted cheese, salsa, sour cream, and scallions), the smoked-salmon plate, and gingerbread pancakes. Named a 2016 Yankee Editors’ Pick for “Best Breakfast.”

Hen of the Wood, Burlington
The menu features an ever-changing but always sophisticated selection of locally sourced foods, including the signature hen-of-the-wood mushroom toast for which the restaurant is named. Named a 2016 Yankee Editors’ Pick for “Best Fresh Vermont Fare.”

Jeff’s Maine Seafood, St. Albans
Proving that a landlocked state doesn’t have to fall short when it comes to seafood, Jeff ’s has been serving ocean-fresh fish and shellfish for more than 25 years. Favorites include clam chowder, grilled swordfish, and pecan-crusted salmon. Named a 2015 Yankee Editors’ Pick for “Best Ocean-Fresh Fare.”

Places to Stay Around Lake Champlain 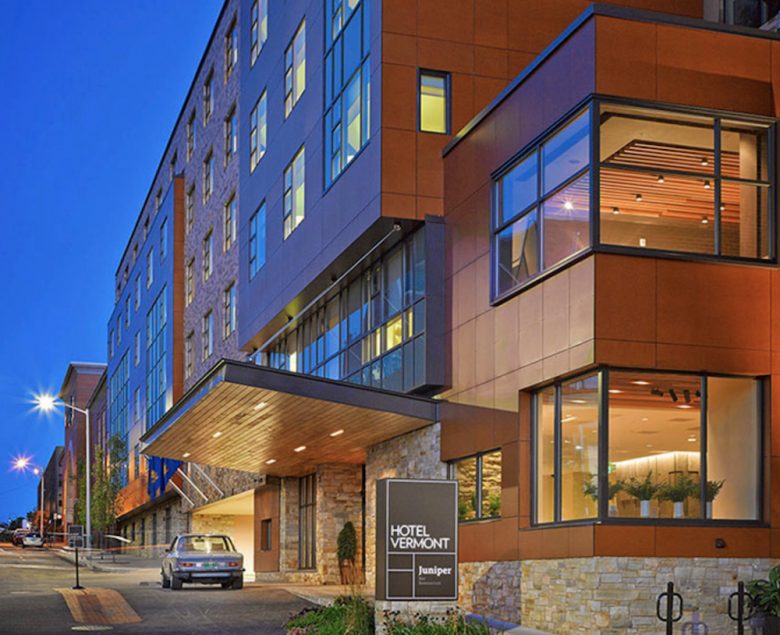 The Lang House, Burlington
This 1881 beauty has been transformed into a posh B&B, whose 11 rooms still display the home’s lavish original craftsmanship while incorporating all the modern conveniences. The two rooms in an 1851 carriage house, set well back from the street, have a country-cottage feel. Named a 2016 Yankee Editors’ Pick for “Best Bed-and-Breakfast.”

Bel-Aire Motel, Burlington
Family-owned and -operated, this cheerful motel sits on the back side of a trendy South End family park. Rooms are basic, well-kept, and just a 10-minute walk from downtown. Named a 2016 Yankee Editors’ Pick for “Best Downtown-Walking Venue.”

North Hero House, North Hero
At this cozy lakeside inn, opened in 1891, some of the 26 rooms have screened-in porches and/or fireplaces; most offer splendid lake and mountain vistas. The inn’s main dining room showcases produce grown on-site, and casual fare is offered in summer and on fall weekends at the bar and grill. Named a 2018 Yankee Editors’ Pick for “Best Island Lodging.”

Have you ever visited Lake Champlain? Tell us about it!

SEE MORE:
The Most Beautiful Places in Vermont
Scenes from a Lake Champlain Houseboat Adventure
Things to Do in Burlington, Vermont

The post Where Is Lake Champlain? | A Travel Guide appeared first on New England Today.

Australia to seal off 6.6 million people in virus-hit state as outbreak worsens