Forget “Beantown” – Boston is a chowder town, and by that we mean creamy clam chowder. In fact, you’d be hard-pressed to toss a clamshell in any direction without hitting a restaurant serving a variation on this creamy comfort food. Some chowders might boast more clams, others might be thicker or thinner in texture, but all will warm up a chilly day. Nevertheless, there are degrees of greatness, and we’ve done enough tasting around town to have come up with our list of favorites. They’re all a little different, but each is excellent in its own way. Take a look below, and find the best clam chowder in Boston for you. 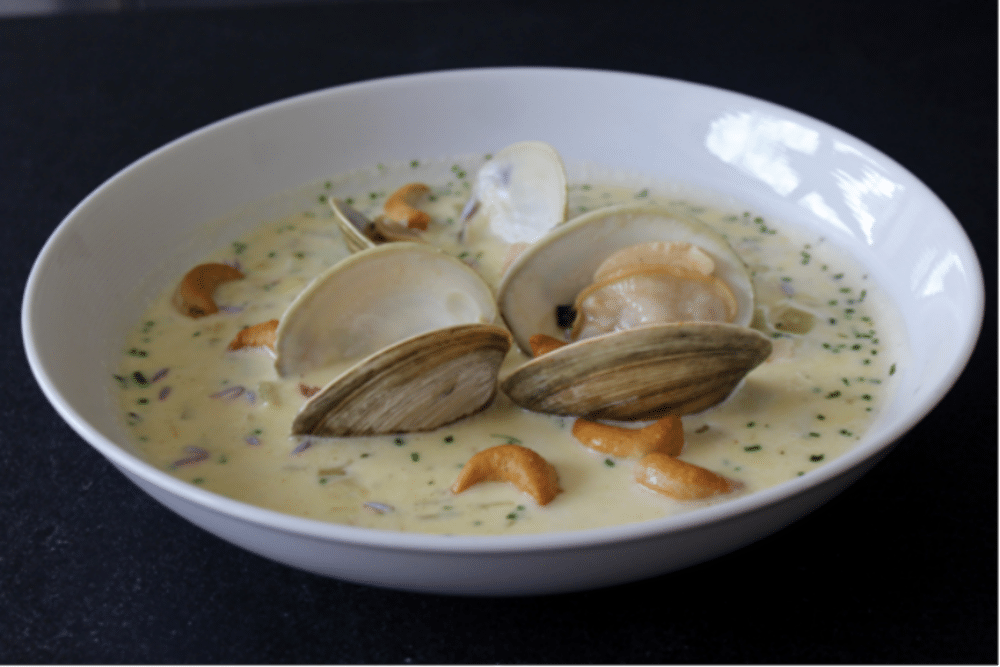 At Mooncusser Fish House, chef Carolyn Johnson tops her chowder with homemade crackers that she cuts into moon shapes.

OK, technically this is a seafood chowder, stocked as it is with smoked scallops and skate along with clams. But it is clam-dominant, as evidenced by the freshly opened bivalves waving at you from the creamy, chive-flecked base. The team at Mooncusser, which won our 2018 Yankee Editors’ Pick for Boston’s best seafood, are at their best when reimagining classic fare, and the cute little moon-shaped crackers win points for originality. 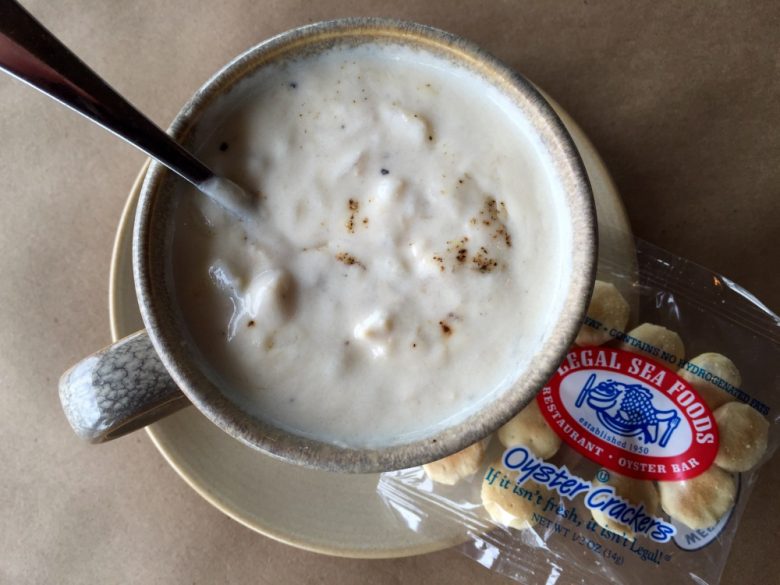 Seafood is a hot restaurant category these days, so the beloved seafood institution that has served Boston so well and so consistently since 1950 might be easy to overlook … but not when it comes to chowder. Intensely creamy and loaded with clam flavor, this is the standard by which many people measure a good chowdah, and on a cold and rainy city day, there’s nothing quite like its power to warm you up. 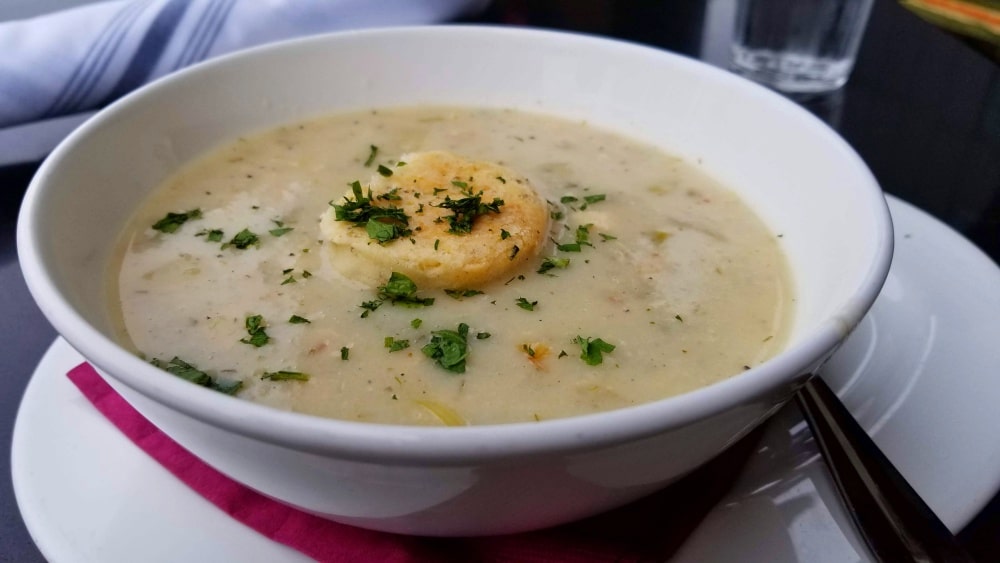 Fresh herbs and a biscuit are signature flourishes at the Daily Catch.

Best Clam Chowder in Boston for the Italophile: The Daily Catch

If you love Italian food and chowder, this is the one for you. Loaded with clams and accented with herbs, the chowder at the Daily Catch, our 2018 Yankee Editors’ Pick for Boston’s best chowder, brings to mind linguine alle vongole, in liquid form. We love the chunkiness, the lightness, and the homemade biscuit garnish. The chowder is only available at the Seaport location, but that’s only fitting, given its million-dollar view of Boston Harbor. 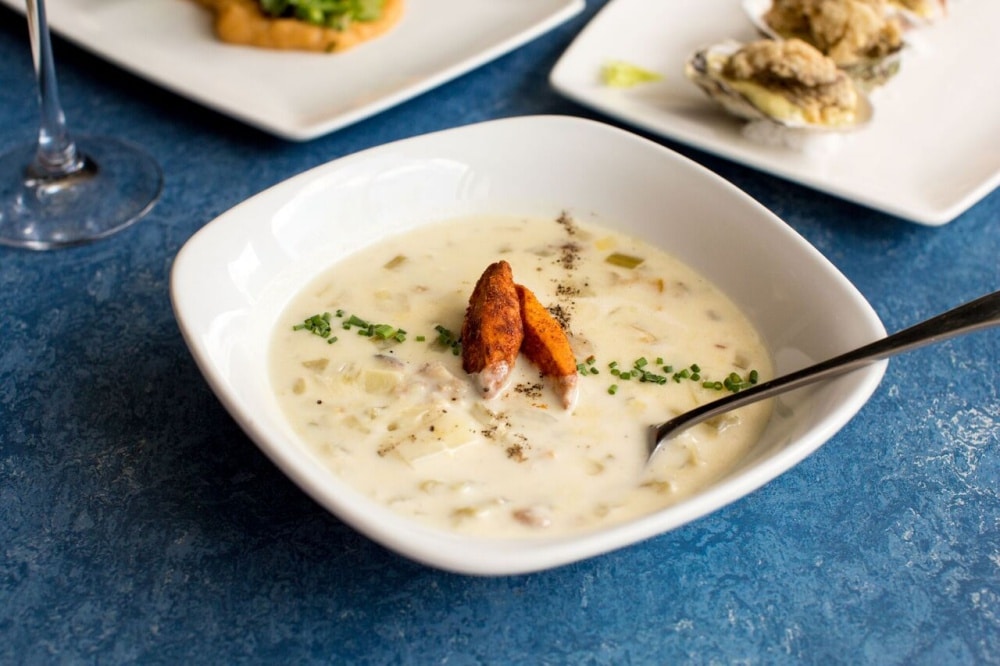 The upscale-clam-shack vibe at B&G Oysters runs right through the clam chowder, garnished here with a spicy crouton.

Best Clam Chowder in Boston for the Francophile: B&G Oysters

Almost every clam chowder starts with salt pork or bacon, but at B&G they use lardons, those distinctively French cuts of cured pork. It’s a small detail, but one expressive of chef Barbara Lynch’s larger vision for B&G, which was to marry traditional clam-shack fare with classic French cooking techniques, along with a side of bistro chic. This chowder is creamy but not extra-thick, which will please those purists who turn up their noses at (sacré bleu!) flour-thickened broth. Even better? They also serve one of our picks for the best lobster rolls in Boston. 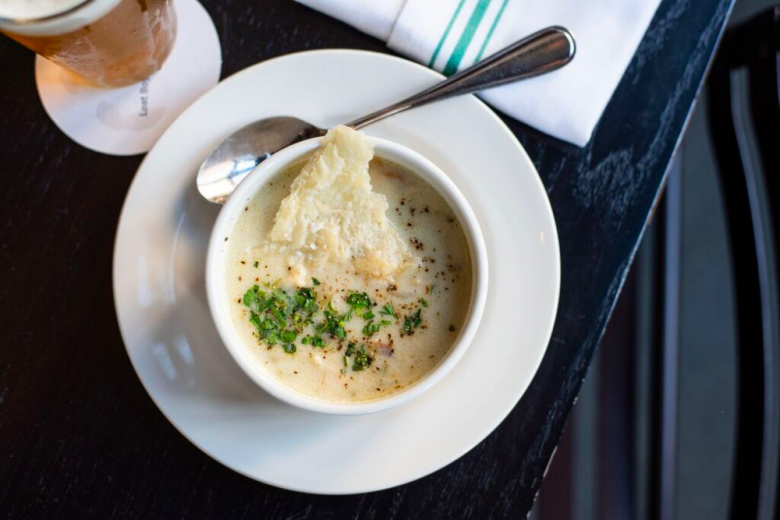 The chowders at Row 34 (pictured here) and its sister restaurant, Island Creek Oyster Bar, begin with similar bases, but the flourishes are different. The homemade saltine is Row 34’s signature topper.

At each of these sister restaurants — one in Kenmore Square, the other in Fort Point Channel — the chowder base is made with house-cured bacon and fresh clam broth (a labor-intensive rarity these days). And while the littleneck clams may not all be pulled from the same Duxbury Bay waters that supply the restaurants’ signature oysters, they’re some of the freshest around. The garnishes vary (buttermilk biscuits at Island Creek, house-made saltines at Row 34), but the quality is the same. And at Row 34, you’ll also find our top Boston lobster roll. 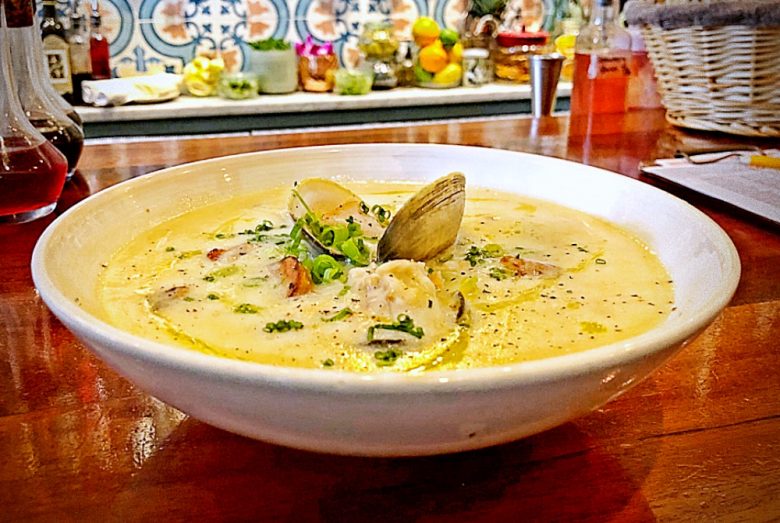 Saltie Girl chef Kyle McClelland capitalizes on the oysterlike flavor of salsify to enrich his chowder.

Best Clam Chowder in Boston for the Adventurer: Saltie Girl

As with Row 34 and Island Creek Oyster Bar, Saltie Girl’s chowder begins with house-cured bacon. But whereas the former stick to a fairly classic list of ingredients, chef Kyle McClelland takes Saltie’s chowder in a different direction: The clams are cooked to order and the base is enriched with bits of … salsify? Yes, that would be the quirky root vegetable, a member of daisy family, that bears a sweetly mineral flavor reminiscent of oysters. Get it? Oysters and clams. We also like how the tender skin of the little marble potatoes adds a hint of nuttiness to the mix.

Where are your top spots for the best clam chowder in Boston? Let us know!

The post Where to Find the Best Clam Chowder in Boston appeared first on New England Today.

The Most Beautiful Places in Maine