Where Was the First Department Store Santa Claus? 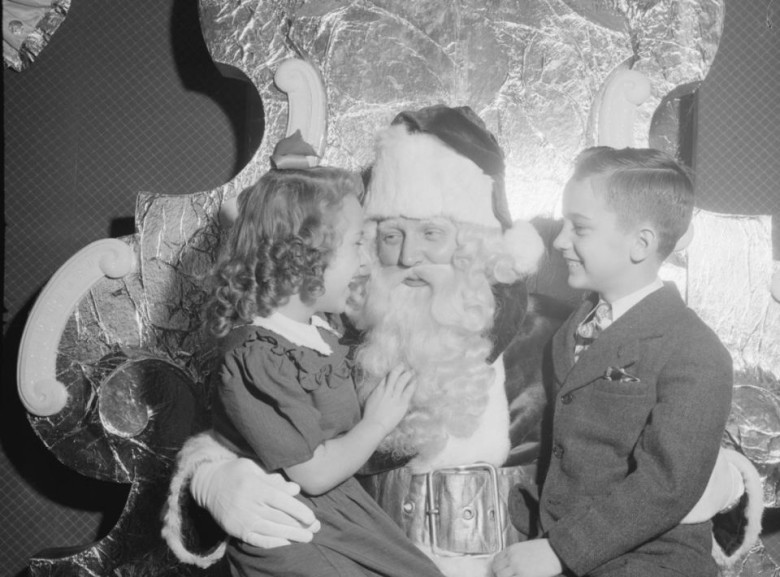 The Santa at Montreal department store Eaton’s in 1946.

Where was the the first department store Santa Claus?

In the late 19th century, children saw drawings of Santa Claus in all the newspapers and in magazines. There were Santa figurines and stories and poems about Santa. They had little hope, though, of ever meeting the old gent in person unless they could manage to stay up all night next to the fireplace. But James Edgar of Brockton, Massachusetts, commonly known as “Colonel Jim,” changed all that for good. In December of 1890 Edgar gave America the first department store Santa Claus.

In 1890 Edgar, who owned a dry goods store, took the train to Boston and had a Santa costume tailored especially for him. A few weeks before Christmas he made his first appearance. Many years later a man who’d been a boy that day reminisced: “My parents had taken me over to the Boston store [Edgar’s] on Main Street. I remember walking down an aisle, and all of a sudden, right in front of me, I saw Santa Claus. I couldn’t believe my eyes. And then Santa came up and started talking to me. It was a dream come true.”

Children began arriving by train from Boston, Providence, Worcester, and even New York. By 1891 Santa had appeared at many major department stores, and by the turn of the century the department store Santa was an institution.

But James Edgar’s influence was not limited to a marketing gimmick: on one occasion his example made the Christmas fantasy come true. Brockton, once world famous as a shoe-making town, had fallen on hard times by the 1920s. The city’s truant officer discovered that hundreds of children weren’t going to school because their families couldn’t afford to buy new shoes or repair the old ones. The truant officer, Charles Brooks, explained the situation to William Wright, the president of Edgar’s Department Store.

“What can I do to help?” Wright asked.

“Just what the late James Edgar would have done,” replied Brooks.

Wright closed down the top floor of the store, purchased a $3,000 shoe-repairing machine, and hired half a dozen cobblers. By Christmas they had repaired more than 1,000 pairs of shoes in the James Edgar Shoe Shop — for free. By spring 5,000 pairs were fixed.

Edgar had once said of Santa Claus, “I have never been able to understand why the great gentleman lives at the North Pole. He is so far away…only able to see the children one day a year. He should live closer to them.” Thanks to Colonel Jim, he does.

Editor’s Note: While retail giant Macy’s also claims to be the home of the first department store Santa, the distinction appears to lie in the manner of dress. James Edgar portrayed the fat, jolly version as popularized by artist Thomas Nast for the cover of Harper’s Weekly in 1862.

The post Where Was the First Department Store Santa Claus? appeared first on New England Today.

Deepika Padukone’s post workout selfie with her trainer is all the motivation you need to hit the gym; See pic

Fashion designer showcases the future of the runway with 3D models