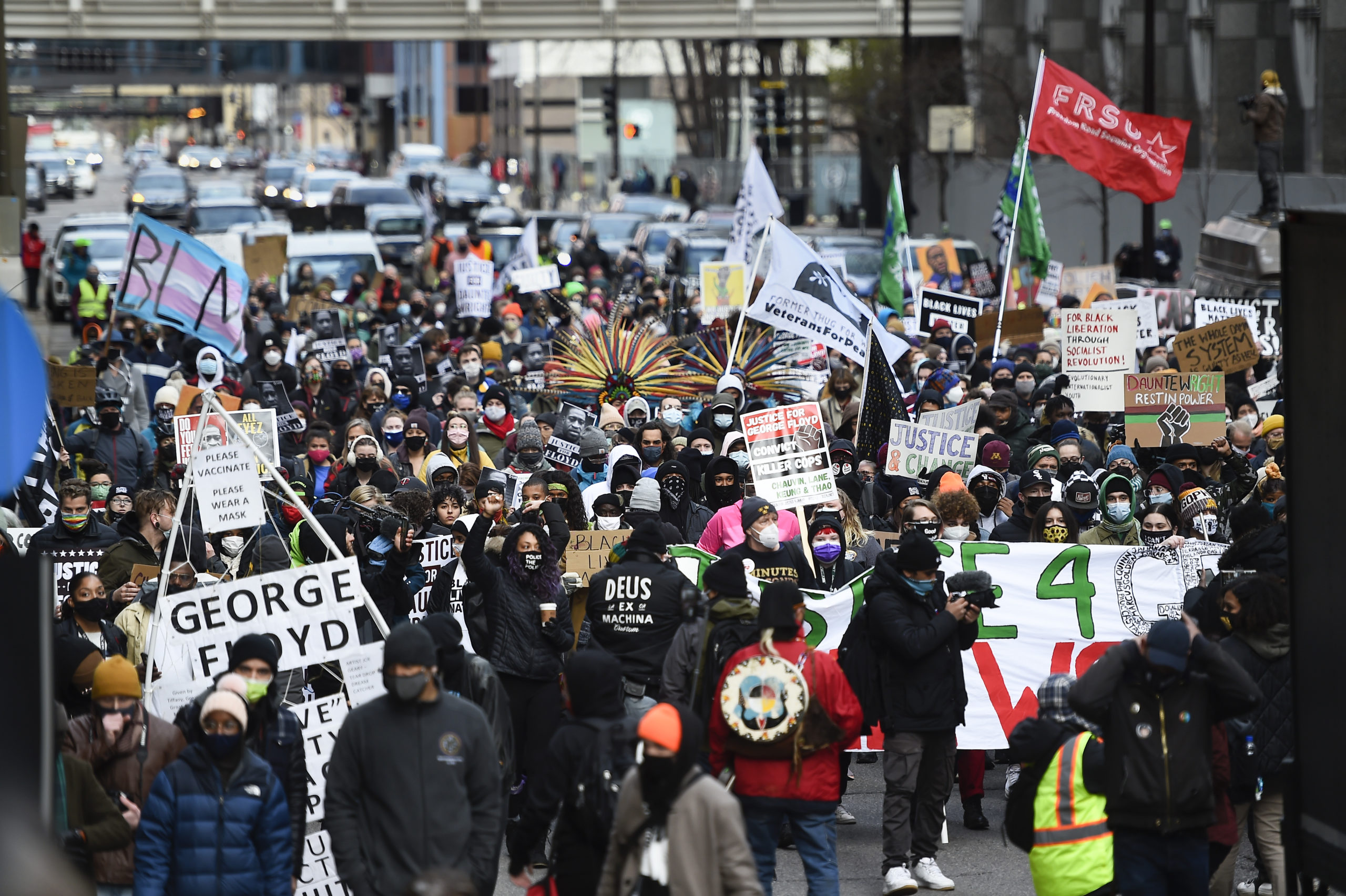 Former Officer Derek Chauvin was convicted on Tuesday of murder for the May 2020 killing of George Floyd, the 46-year-old Black man whose neck Chauvin pinned down with his knee on the pavement of a south Minneapolis intersection for more than nine minutes.

It was an act of police violence so searing that it set off a nationwide racial reckoning nearly one year ago.

The 12-member jury, composed of six white people and six people who are Black or multiracial, returned its verdict to Hennepin County, Minn., Judge Peter Cahill after hearing 14 days of testimony from 45 witnesses — including Chauvin’s former superior officers.

The verdict is likely to provide some solace to protesters across the country who have responded with outrage this month to the police killings of two other Americans of color: 13-year-old Adam Toledo in Chicago and 20-year-old Daunte Wright in Brooklyn Center, Minn.

Wright’s killing, in particular, has shaken the Minneapolis area. He was shot to death during a traffic stop only 10 miles from where Chauvin stood trial, and Floyd’s former girlfriend knew Wright from her work at a local high school.

Any potential unrest provoked by the Chauvin verdict would bring full-circle the countless demonstrations which began with Floyd’s death in police custody last May.

Those resulting protests transformed the politics of a presidential election year already upended by the coronavirus pandemic, touching all corners of the United States — including Lafayette Square in Washington, D.C., where former President Donald Trump ordered the violent dispersal of an apparently peaceful crowd so he could pose with a Bible in front of a nearby church.

In the months before Election Day, the Trump White House and its allies sought to tie all the protests to incidents of rioting and looting that took place in some cities. Trump repeatedly warned the country would descend into all-out anarchy if Joe Biden were elected and reinforced his own “law and order” message by deploying militarized federal forces to Portland, Ore.

In recent days, a handful of governors had activated National Guard troops in anticipation of the Chauvin verdict, and White House press secretary Jen Psaki confirmed on Monday the Biden administration was in communication with state and local officials ahead of the announcement. She would not elaborate further on coordination between the federal government and law enforcement authorities.

“There’s a range of conversations about how to ensure that, no matter what the outcome, there is a space for peaceful protest,” she said. “But, of course, we’ll let the jury deliberate, and we’ll wait for the verdict to come out before we say more about our engagements.”

Biden confirmed Tuesday that he reached out to the Floyd family in a phone call after the Chauvin jury was sequestered for deliberations. Biden told reporters he was “praying the verdict is the right verdict” and deemed the prosecution’s evidence “overwhelming.”

In the final hours of Chauvin’s trial on Monday, the state’s attorneys emphasized Floyd’s humanity, Chauvin’s use of force, medical experts’ testimony, and the nine minutes and 29 seconds of cell phone footage that sparked a mass movement against racism and police brutality last summer.

“This case is exactly what you thought when you saw it first, when you saw that video. It is exactly that. You can believe your eyes,” prosecuting attorney Steve Schleicher told jurors.

“It’s exactly what you knew. It’s what you felt in your gut. It’s what you now know in your heart,” Schleicher said. “This wasn’t policing. This was murder. The defendant is guilty of all three counts. All of them. And there’s no excuse.”

In his own closing argument, defense attorney Eric Nelson stressed the prosecution’s burden of proof, sought to highlight the perspective of a responding police officer, and insisted the case could not simply be narrowed down to the now ubiquitous video of Chauvin’s knee on Floyd’s neck.

“You have to take into account that officers are human beings capable of making mistakes in highly stressful situations,” Nelson said. “In this case, the totality of the circumstances that were known to a reasonable police officer in the precise moment the force was used demonstrates that this was an authorized use of force, as unattractive as it may be. And this is reasonable doubt.”

Nelson later asked Judge Cahill for a mistrial in light of comments made over the weekend by Rep. Maxine Waters (D-Calif.), who urged protesters to “get more confrontational” should Chauvin be found not guilty. Cahill rejected the defense’s request, but noted Waters “may have given you something on appeal that may result in his whole trial being overturned.”

Europe has no excuse for letting Russia surprise it again