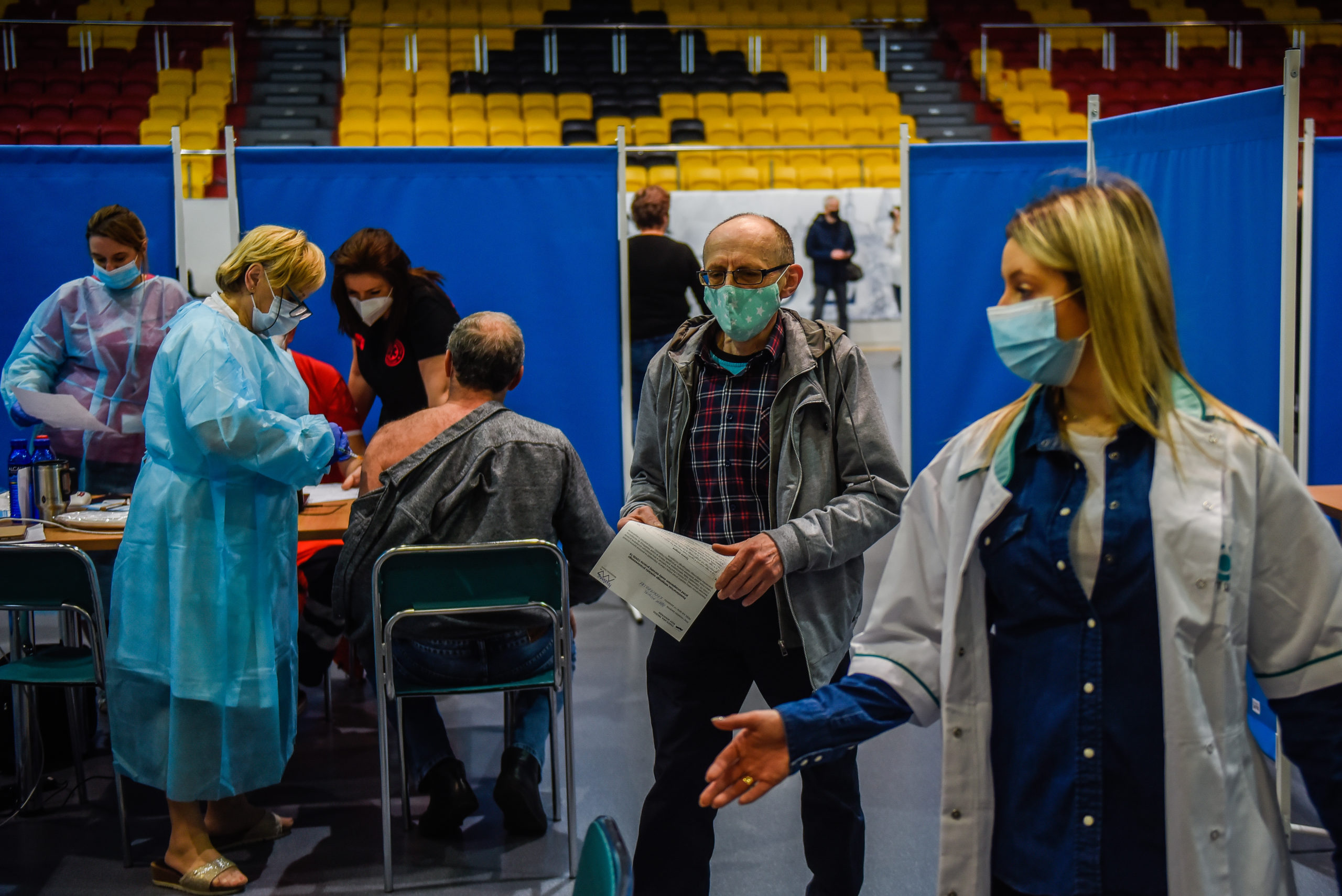 The EU’s shortage of Oxford/AstraZeneca vaccines in recent months came down to simply not having enough serum — and even a significant amount sent from the U.S. couldn’t make up the shortfall.

While a Belgian subcontractor making the serum or “drug substance,” was fulfilling its contract with AstraZeneca, another plant in the Netherlands wasn’t producing enough to be included in the company’s application for approval to European regulators at the end of December, according to EU documents seen by POLITICO and the Belgian magazine Knack.

With so little drug substance coming from the EU, AstraZeneca turned to its U.S. plant in Maryland to make up the difference.

“The most important quantity” of drug substance came from the American plant, owned by Catalent, before being put into vials in Italy in a process known as “fill and finish,” the documents said, detailing inspections in January and early February of three AstraZeneca plants in Belgium, Italy and the Netherlands that produced vaccines for the EU.

The documents don’t specify how much drug substance actually came from the U.S. — one EU official said it was more than half of what formed the EU’s Oxford/AstraZeneca vaccine supply at the time. They also don’t state how many more shipments have arrived from the U.S. since early February.

But they do reveal that the U.S. has played a more significant role in the EU’s vaccine supply than previously thought.

It’s a point that has sometimes been muddied by conflicting statements from EU officials.

European Council President Charles Michel wrote in March that both the U.K. and the U.S. had “imposed an outright ban on the export of vaccines or vaccine components produced on their territory.” But European Commissioner President Ursula von der Leyen has said there has been a “seamless” flow of vaccine products with the U.S.

In light of the role of the Maryland plant, the documents shed light on why von der Leyen took a softer approach to the U.S. when the EU threatened to cut off vaccine exports to countries that didn’t send vaccines in return — a threat primarily pointed at the U.K.

The documents also confirm that the relationship between the EU and U.K. hasn’t been reciprocal: “Nothing” in terms of drug substance “has been received” from the U.K., which has three AstraZeneca plants of its own, they state. However, a portion of what the Dutch plant was making by early February was still slated for export to the U.K., although it remains unclear how much.

The January inspections are just one part in the ongoing story of the bitter dispute between the European Commission and AstraZeneca, which exploded in late January when the drugmaker announced it wouldn’t deliver tens of millions of promised doses to the EU. That announcement prompted EU officials to all but flat-out accuse the company of sending EU-made vaccines to the U.K.

At that time, a team of EU officials, including three Commission staff members and nine national inspectors, were sent to investigate the European plants to see what was causing the massive shortfalls and assess whether AstraZeneca was making its “best efforts” to fulfill its contracts, as its CEO insisted.

The documents, obtained by Knack via a freedom of information request and analyzed with POLITICO, are based on two meetings between the team members on January 29 and February 5. They found that, based on AstraZeneca’s existing supply chain, the company simply couldn’t deliver.

“According to our knowledge, the firm AstraZeneca is not able to honor the quantities defined in the contract with the European Commission and with the schedule defined at the origin,” the inspectors wrote.

“Today the only solution would be to import more Drug Substance batches from” the United States, because “some capacity” for fill-finish is always available at the Italian site, they added. They also confirmed plans to get drug substance from other countries, including South Korea and China.

It’s a far different picture in the U.K. — where more than half of Britons vaccinated have gotten the Oxford/AstraZeneca jab — or the U.S., where the vaccination effort is racing along so quickly that some U.S. officials say the country probably won’t need to authorize the AstraZeneca jab at all. In theory, that should free up more vaccine substance for the EU coming from Maryland.

But even if there is an influx of U.S. supplies, it remains unclear whether the drugmaker can meet its deliveries to the EU, coming on top of a huge shortfall in the first quarter, when it delivered only 30 million doses rather than the 100 million promised.

The persistent delivery delays, along with safety concerns over the jab’s side effects, have seriously undermined any chances that the EU will sign future contracts with the Anglo-Swedish company. Instead, the Commission is turning its attention to mRNA vaccines, having just agreed to buy 1.8 billion more doses from BioNTech/Pfizer.

The components that form one vial of vaccine are often produced at different locations around the world.

In the EU, AstraZeneca makes drug substance at two subcontractors: a Belgian plant originally owned by Henogen but bought by Thermo Fisher Scientific in early 2021, and another, Halix, in the Netherlands. The substance is then sent to a plant owned by Catalent in Anagni, Italy, to be put into vials. Another site, the AstraZeneca subsidiary MedImmune, does the “batch release,” or quality checks, before the vaccines are sent to a Belgian distribution site.

The company also has three plants in the U.K.: Oxford Biomedica and Cobra Biologics both make drug substance, although Oxford Biomedica is the only U.K. site approved to send substance to the EU. Wockhardt carries out fill-finish in the U.K. and another plant in Germany, owned by IDT Biologika, has confirmed it has also done fill-finish for doses heading to the U.K.

Shortly after AstraZeneca announced the EU shortfalls in January, CEO Pascal Soriot said the issue was at its Belgian drug substance plant. But these documents contradict him, detailing instead assertions from the company and EU officials that the plant was meeting its contractual obligations. “Henogen has fulfill[ed] [its] contact with AZ,” the inspectors wrote. “We cannot expect more efforts from them.”

The company also added a new and “more efficient tool” to that site, which was expected to ramp up manufacturing by February 6, the report said. That plan may have been a reference to the expectation, laid out previously by an EU official, that the site would go from making about 4 million to 8 million doses a month.

By contrast, the Dutch plant did not produce much drug substance in 2020 when the company submitted the vaccine for approval in the EU, the documents suggest. It had an initial contract to make drug substance for Oxford University’s clinical trials in April 2020, but did not sign another contract with AstraZeneca to make vaccines beyond clinical trials until early December.

According to European Medicines Agency information last December, Halix “has been removed as a … manufacturer from the dossier and will be added later in Q1 2021,” they state.

The likely reason for the suspension was that the plant wasn’t “ready” to produce enough drug substance, the EU official said. “If they haven’t manufactured enough, then they can’t meet qualification status.”

By February 8, however, the Dutch plant seemed to be producing substance. The inspectors wrote that it was going to the U.K., most likely a fill-finish site in Wales, and to Italy. More shipments to the U.K. were expected, with the inspectors writing that the production of substance was “completed” and “shipment” of some substance to the U.K. “is anticipated.”

However, the Commission’s export controls appear to have kept the substance in the EU. International Market Commissioner Thierry Breton said after a March visit to Halix that nothing had been sent from that plant to the U.K. after the export controls were implemented in late January. By that point, the plant was able to make around 5 million doses a month. It was approved to make drug substance for the EU at the end of March.

Amid the production squeeze, the inspectors wrote, a “more sustainable” solution than relying on the U.S.-made drug substance could be adding more drug substance producers, possibly from South Korea’s SK Bio. They also noted that another application is pending, most likely with China’s WuXi.

Since then, AstraZeneca has submitted a request to have SK Bio added to the company’s EU conditional marketing application, which would allow the EU to use vaccines made at the site, the EU official said, adding that the application is still pending with the EMA.

It was the inspection of the Italian fill-finish plant run by Catalent that showed that the bulk of the vaccine substance arriving there actually came from the Maryland site — and confirmed the absence of shipments from the U.K.

Belgium and the U.S. “are the only ones to supply” drug substance to Italy, the inspectors noted.

The number of doses filled at the Italian plant was expected to decrease in 2021, as Catalent was also slated to fill the Johnson & Johnson vaccine. That order was to take priority over Oxford/AstraZeneca, which would move to “a less powerful, slower line” at a certain point. (The date for that switch in the document is redacted.)

AstraZeneca has since inked more contracts to do fill-finish elsewhere in the EU. It signed a contract with Universal Farma’s Insud in January, and in early February, inspectors said the company had received the “frozen bulk” and planned to do batch validation in March. And under the just-announced partnership with Germany’s IDT Biologika, the plant would do the fill-finish for at least 10 million doses.

The Italian site, meanwhile, also filled substance that came from SK Bio, but that was then sent to “non EU markets,” the documents noted.

After fill-finish in Italy, the next step is sending the vials to AstraZeneca’s subsidiary, MedImmune, in the Netherlands to do “batch-release,” or quality checks. From there, the doses are sent to a distribution site in Belgium. Notably, the documents make clear that nothing from that Belgian site has been sent outside the EU.

“After verification, they [have never exported batches] to countries out of EU,” the inspectors wrote.