Barely 200 feet from the shallows of long sands beach, Cape Neddick Light perches so handsomely on its bony 2.8-acre nest of Nubble Island that we call it simply “Nubble Light.” Maine boasts more than 60 standing lighthouses. Nubble Light, Maine’s southernmost light, may well be the one we love most. 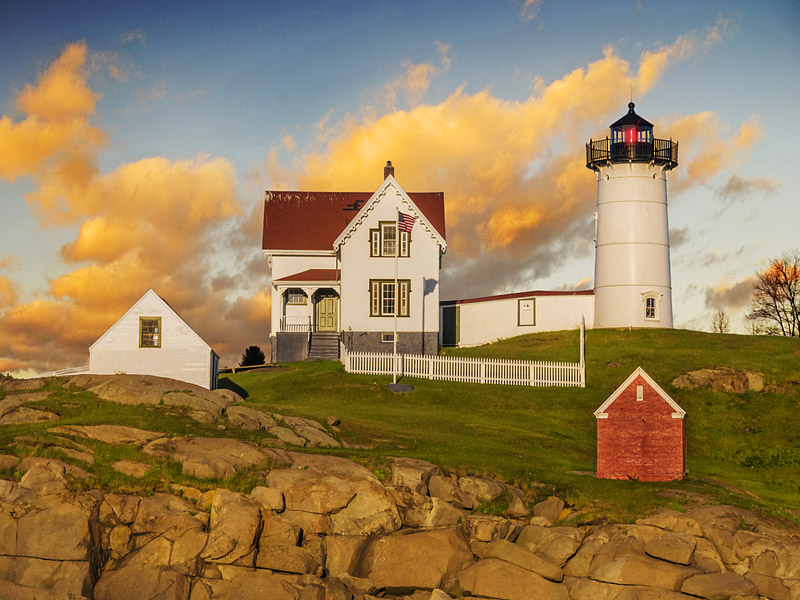 In 1977, when the Voyager spacecraft blasted off for Jupiter and beyond in search of possible alien life, their capsules carried photos to show what we revered here on earth. Among those photos: the Great Wall of China, the Grand Canyon, Nubble Light. The light-house and the keeper’s house are on the National Register of Historic Places and are engraved on York’s town seal, as if to say: Nubble belongs to the country, but here is its home.

The keepers of the light who lived here from 1879 until the last Coast Guardsman left in the summer of 1987 felt that this was their calling. They tended the French-crafted Fresnel lens as if it were a child, polishing its light until it shone like gold. Sometimes winter blew fog that blanketed the knoll for weeks at a time. The keepers knew that the safety of ships depended on their keeping Nubble’s red light glowing 15 miles out to sea. At dawn, they’d extinguish the light, watch the sun creep over the water, and start their chores.

Nubble Light is at its finest on a blue-sky day when the ocean scent makes mere breathing worth the trip. Stop at tiny Sohier Park on Nubble Road. Ahead you’ll see the gleaming white tower reaching 41 feet high, and beside it the trim red-roofed keeper’s house, a few outlying sheds, and a white picket fence, as if the lighthouse stood on a shady neighborhood street.

Lighthouses have become icons of our yearning, speaking to us of lives spare and romantic at the same time. We wish we lived there; we know we cannot. So we carry the light inside, no matter where we live.

Is the Nubble Light your favorite New England lighthouse?

This post originally appeared in the September/October 2015 issue of Yankee Magazine.

Liverpool breaks yet another record in remarkable season

Bulgaria lurches into political crisis over its murky deep state