Bill Gould knows how to listen.

On a warm July afternoon in Pomfret, Connecticut, Gould emerged from his workshop, stepping down off the thick granite step onto the grass, and his blond-white hair took the light the same way as the swaying hay in the field behind his house. He’s tall, lean, thick-forearmed, with the slight tight hunch in the shoulders that comes from 50 years of lugging lumber, prying, planing, painting, planting. The light in his eyes belies his 75 years. 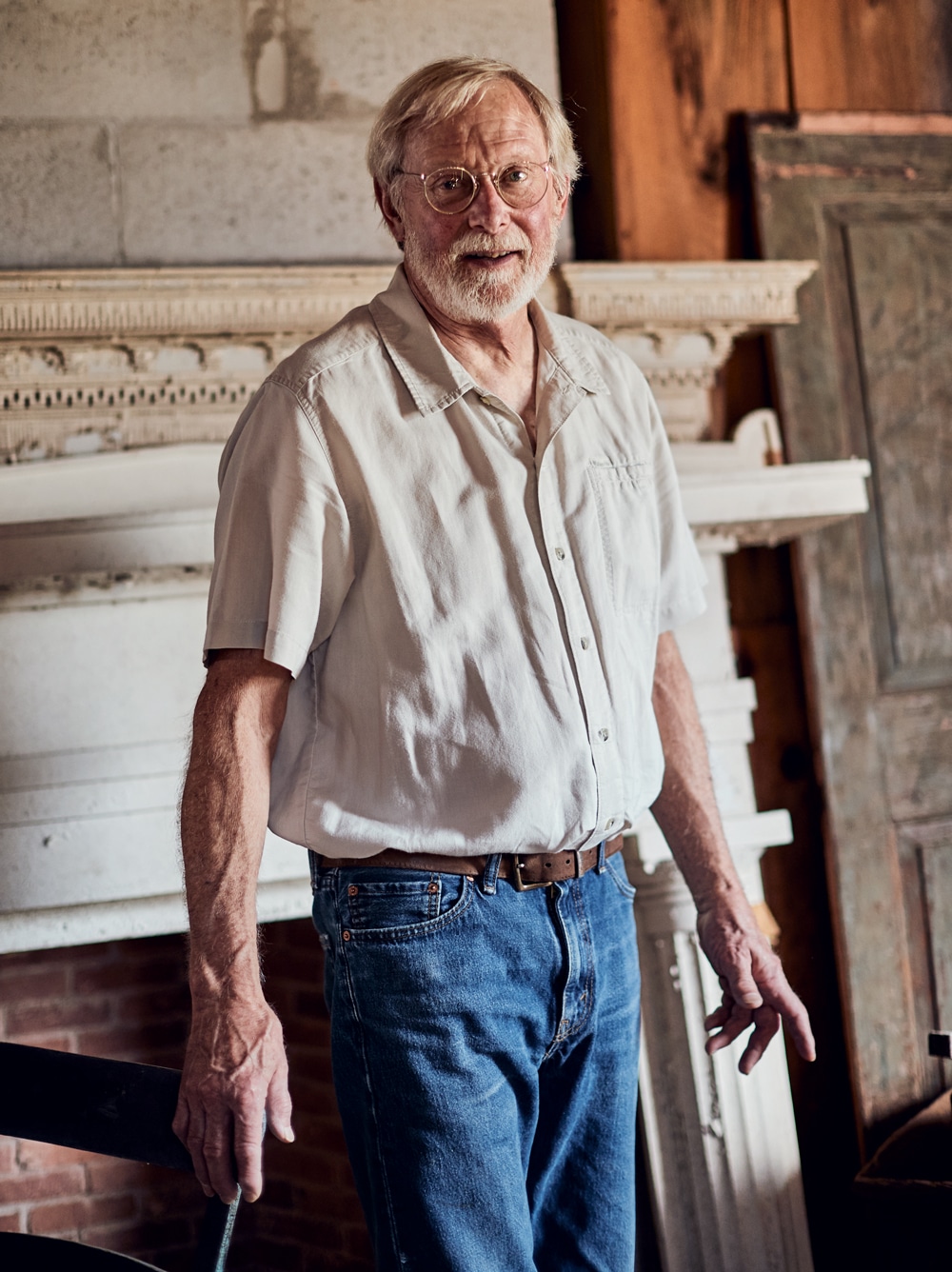 Finding new homes for historic buildings is both a career and a calling for Bill Gould, shown in his Pomfret, Connecticut, workshop.

Given his wire-rimmed glasses, shorts, and a loose T-shirt, one can picture Gould onstage with a banjo as easily as doing the work he does, preserving and relocating historic buildings and homes in southern New England and far beyond. Instead of letting a home or barn or even an old outhouse molder and disappear forever, Gould and his team step in and, piece by painstaking piece, dismantle the house, labeling each board, beam, baluster, threshold, sash, mantel, pane of glass, and stick of trim. Then they put it in storage until a buyer wants it reconstructed, at which point, piece by painstaking piece, they put it back together again. In the process, the structures reveal their secrets, and Gould has spent his lifetime listening.

An urge to build and make was inborn, he explained, sitting in his office on the second floor above his workshop, in a building he built himself in 1989 from the trees taken down when a tornado ripped through his land. He gestured at the walls, the floors, explaining that every board came from trees that grew right here. How to explain the feeling of entering a place made from the material that came from the land on which the building sits, nails hammered by the arm of the person you’re sharing a conversation with? One sensitive to the language of houses will detect it. It’s a little like the difference between biting into a strawberry you’ve grown in your garden versus one shipped to the market from Chile in February. 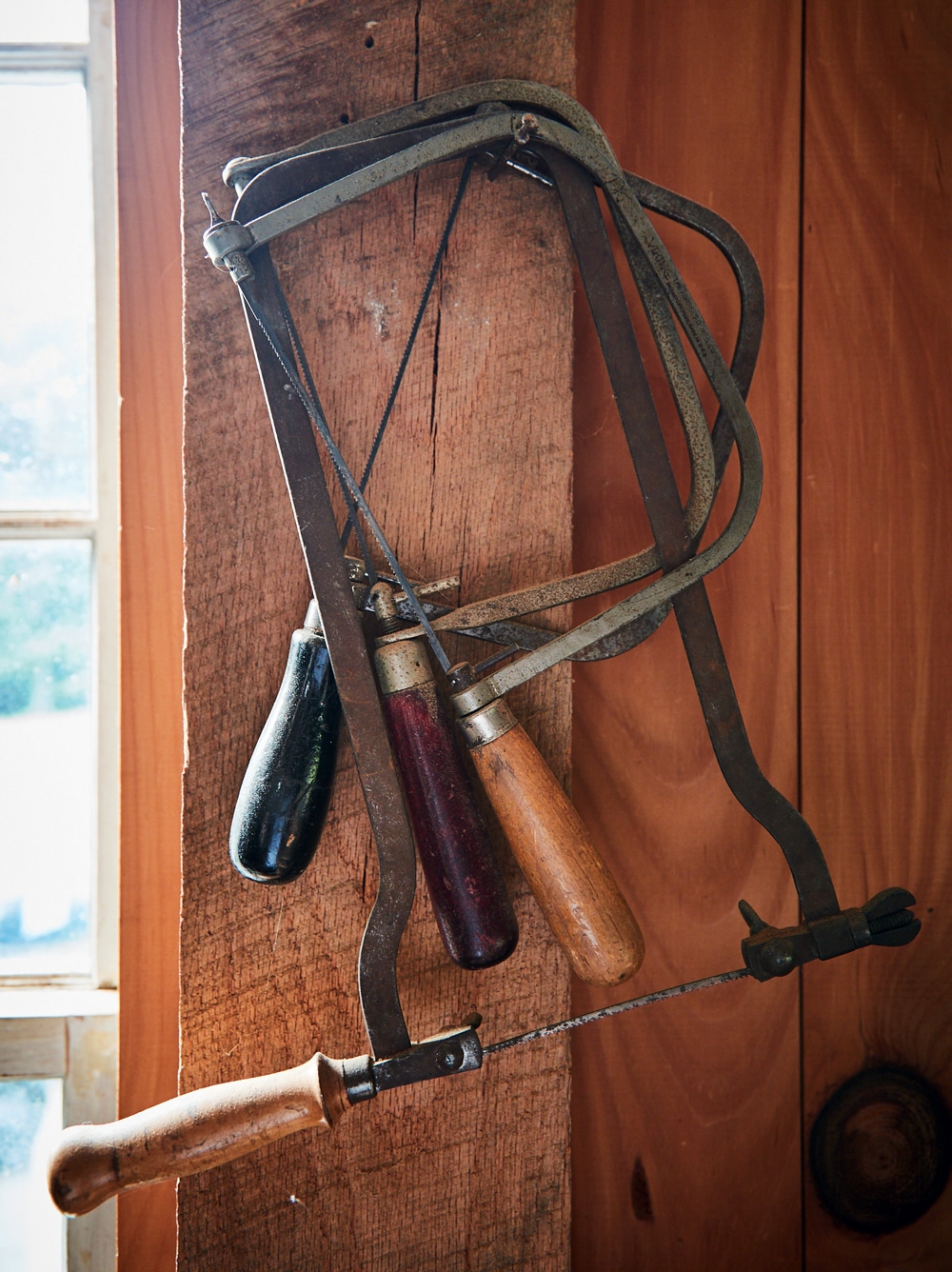 A nest of well-used coping saws in Gould’s workshop.

Gould was born in White Plains, New York, and raised in Rhode Island, then went to art school in Connecticut. He wanted to be a sculptor, but “I bailed out after three years. I learned how to get what I wanted, and who needs a degree when you know how to get what you want?” The urge toward art school reveals an attention to form, line, and beauty, and leaving school when he got what he’d needed from it suggests a deeply practical streak. The practical and the creative make an ideal combination for the work that Gould steered himself toward, which he did in part because he knew he had to make an actual living. “Sculpture can be something you walk in—it doesn’t have to be something you put on a table.”

His website (historic-architecture.com) lists a variety of properties for sale, and typically the kinds of properties Gould takes on will run you between $30,000 and $90,000. A listing for a two-story house built in 1750 in Hartford has the specialized language of the work: Drop summers, small joists, deep chimney girts and end beams as well as gunstock posts make up the hewn oak frame. Images from another property, an 1837 Cape in New Hampshire, show intricate molding, scrollwork up a staircase, a shaft of light against beams in the attic. In the listing for the Hartford house, there’s a photograph of an early chalk drawing discovered on the roof sheathing, depicting the house with a stick-figure tree. Such are some of the messages the old houses hold. A ghosty-ness up there above the rafters, stories under the floorboards. 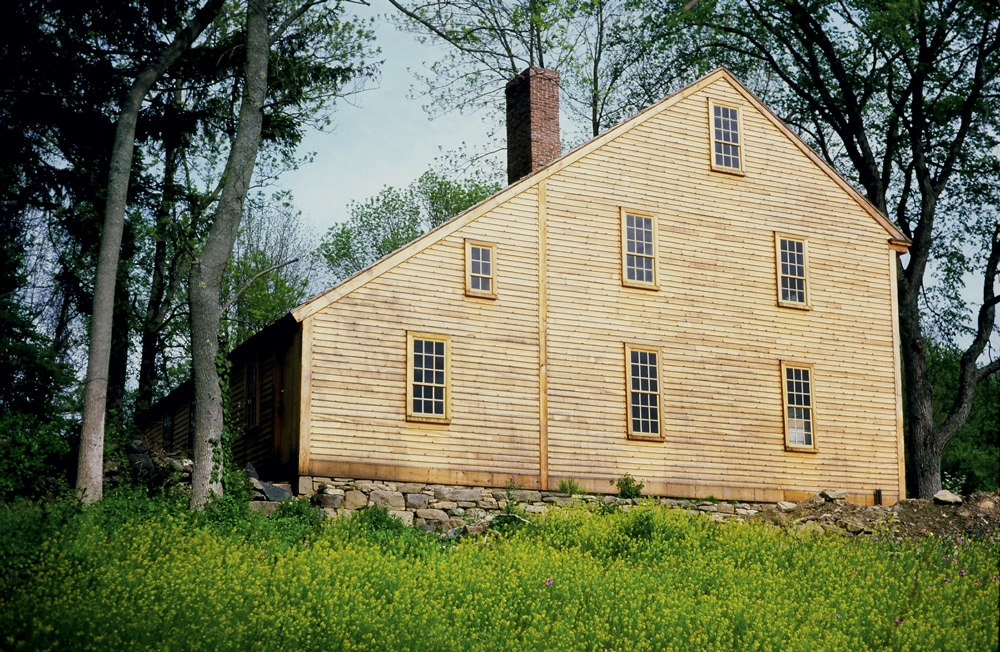 One of Gould’s rare full-house restorations, a pre-1750 saltbox in Connecticut.

When asked if he believes in ghosts, Gould leaned back in his chair and put his hands behind his head. “No,” he said, shaking his head. “I don’t believe in ghosts. I’ve never come in contact.” He paused for a moment. “But I do find myself to be a witness.

“My business marks the end of the line for a building,” he continued. And he talked of entering places “that have been abandoned or ruined by ignorance,” and being alone in these old structures, and how that’s when he begins to feel the building. “And you start to wonder, Who was here? What happened in this place?” Maybe a house had a small room, maybe it feels a little strange: “They didn’t deal well with oddities back then. Eccentricities. Deformities. Incest. So they put them in a room and fed them through a crack in the floor.” He’s seen those cracks in the floor.

He talked of a house in Grafton, Massachusetts, standing in its kitchen and seeing light fall on a patch of floor, worn in the place in front of where the sink used to be. “It showed the wear of a woman standing there, who toiled there, worked there, took care of her family there. You tear it up, and the story’s gone.” For Gould, these old buildings aren’t just accumulations of joined wood, walls, and stone. “There’s nothing about one thing,” he said. “Religion, politics, sex, desire, interests, they’re all intertwined. Do walls talk?” he asked, as though the answer was self-evident. 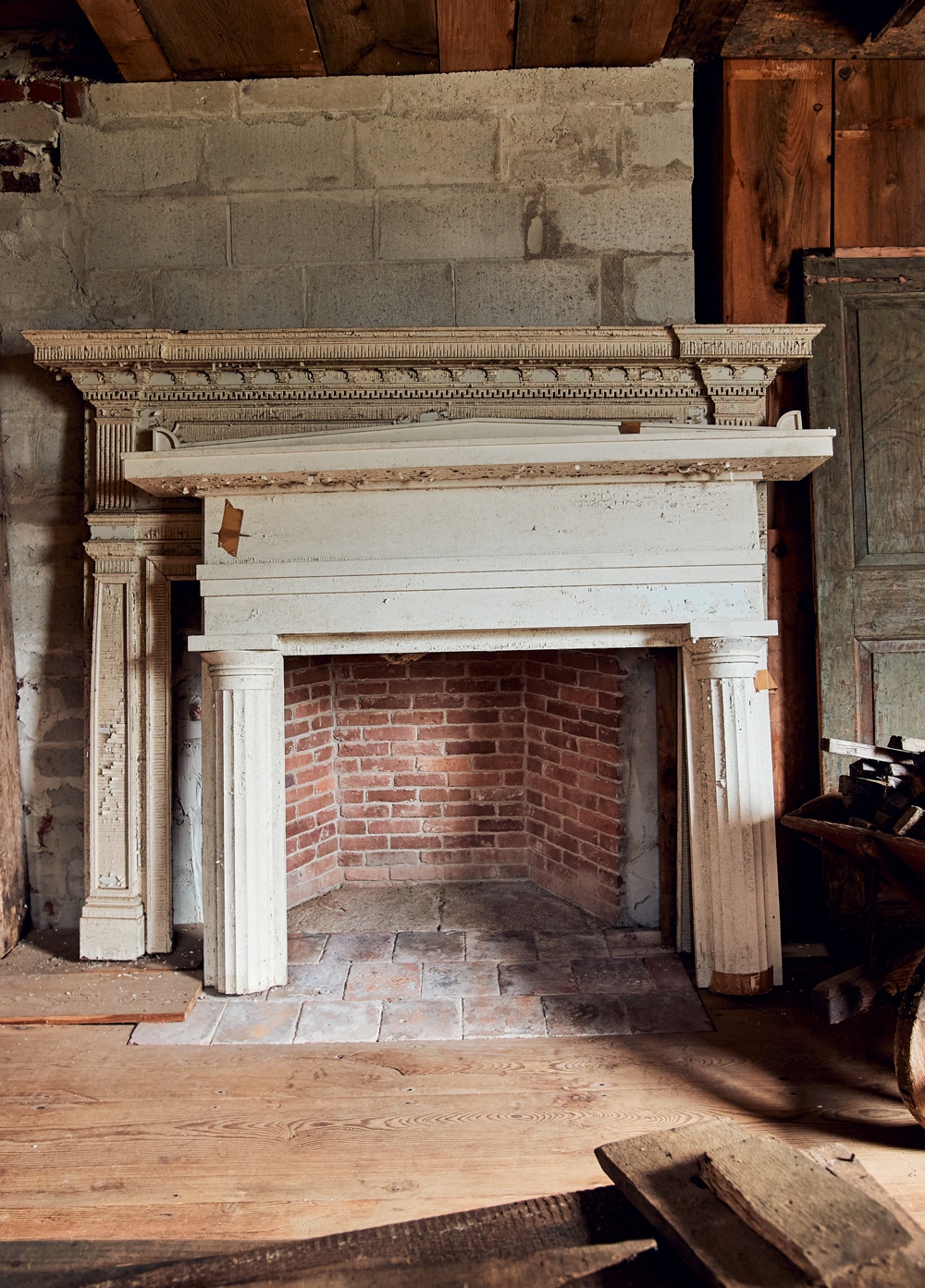 In dismantling these old New England homes, Gould has found evidence of many sorts of stories, and in his way, he keeps these stories alive. Some get told through objects left under thresholds, behind walls, above doors. Gould talked of slavery, of free and captive history, and his work with anthropologist Warren Perry, whose research focuses on slavery in the Northeast, and how slaves hid objects as well as parts of people deep within structures: you might find “a scab, some hair, a fingernail, a tooth.” Once he found a Bible from 1783 ripped in half, one part on each side of the lintel of the fireplace with an enslaved woman’s name written in it. There’s so much that’s not in the history books, he said.

As someone whose life’s work has him living in history, Gould straddles now and then. At the time we spoke, his flip phone was 16 years old. “You can’t do this with an iPhone,” he said, lifting his phone in its worn canvas case off the table and dropping it down three feet. Downstairs, in his workshop, he showed his hand tools with pride: a gouge, a plane. We stood and felt the difference between a railing that had been planed smooth and one that had been sanded. He showed the ribbons of wood he’d planed off the rail—long, translucent coils. Layer by layer pulled away, to reveal something underneath. 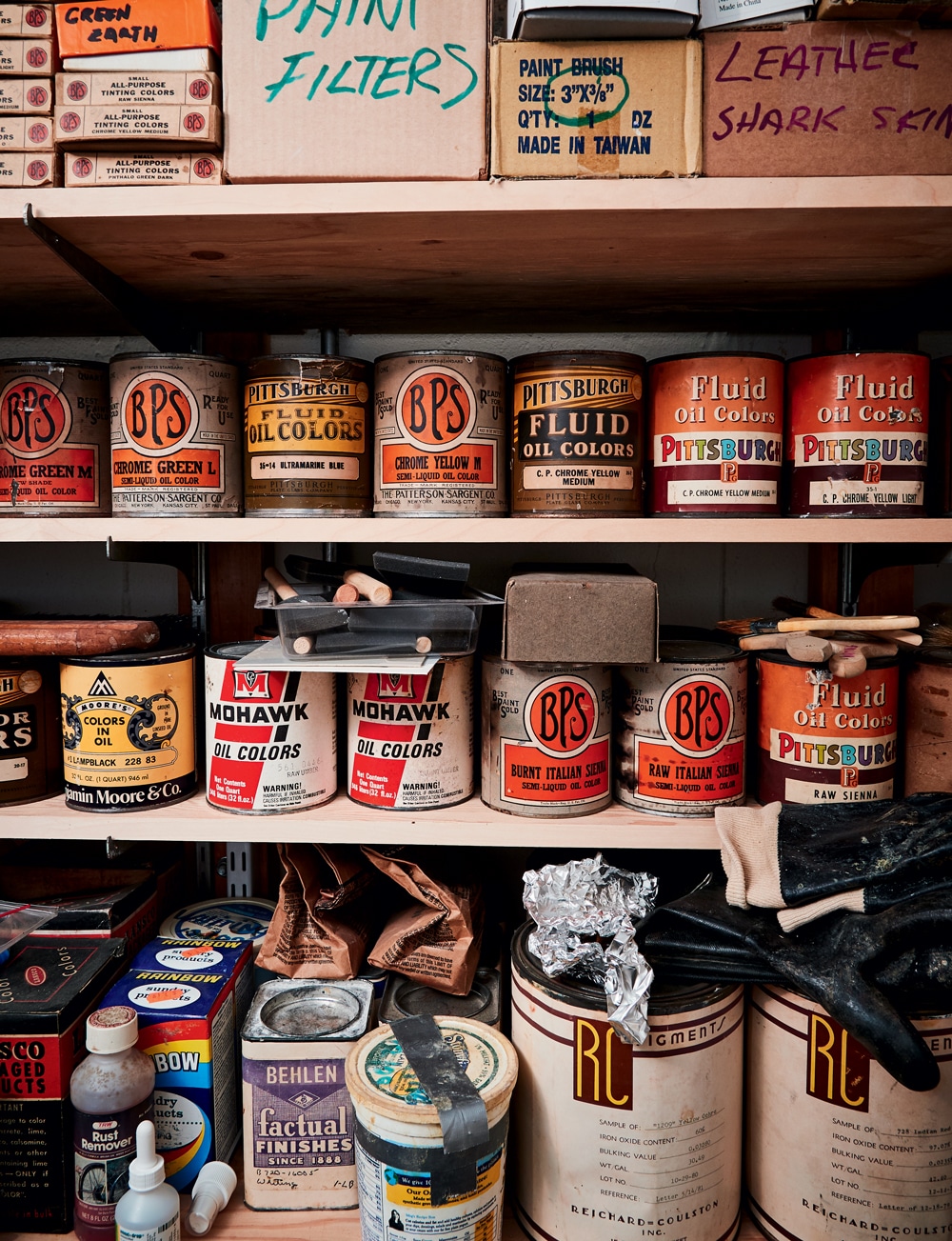 The paint room in Gould’s workshop, including pigment in oil dating back to the ’40s.

In the basement, cans of oil paint stand stacked on shelves and the sharp singe of turpentine fills the nose. He talked of the corner-cutting that goes on today, the shortcuts, the synthetics, and he’s sympathetic: Custom siding for a client is costing something in the ballpark of $50,000 for the clapboards alone. “Who can afford this?” he said.

One can tell he’s a man of high standards, of getting as close to perfection as possible, and he’s aware, too, that perfection is an illusion, that boards and buildings sag, wiggle, bend, as we do, over time.

“The work makes you conscious of the end,” he said. “It’s all part of understanding humanity. How we live, how we die, and what we pass on.”

Sidebar: From Connecticut to Savannah

Four years ago, Peter Galloway, who has loved historic architecture all his life, searched across the South for a vintage house he could move to the empty lot beside his 19th-century Printmaker’s Inn in Savannah, Georgia. “Nothing panned out,” he says. Then he found the Hills House, which Bill Gould was rescuing from demolition in East Hartford, Connecticut. Much of the structure was built in the 1740s; experts attested that some timbers dated from 1692. “When I saw it in person, I knew it was the house,” Galloway says. And when research showed that his family was distantly related to the original owners, it “made it almost seem like it was meant to happen.” 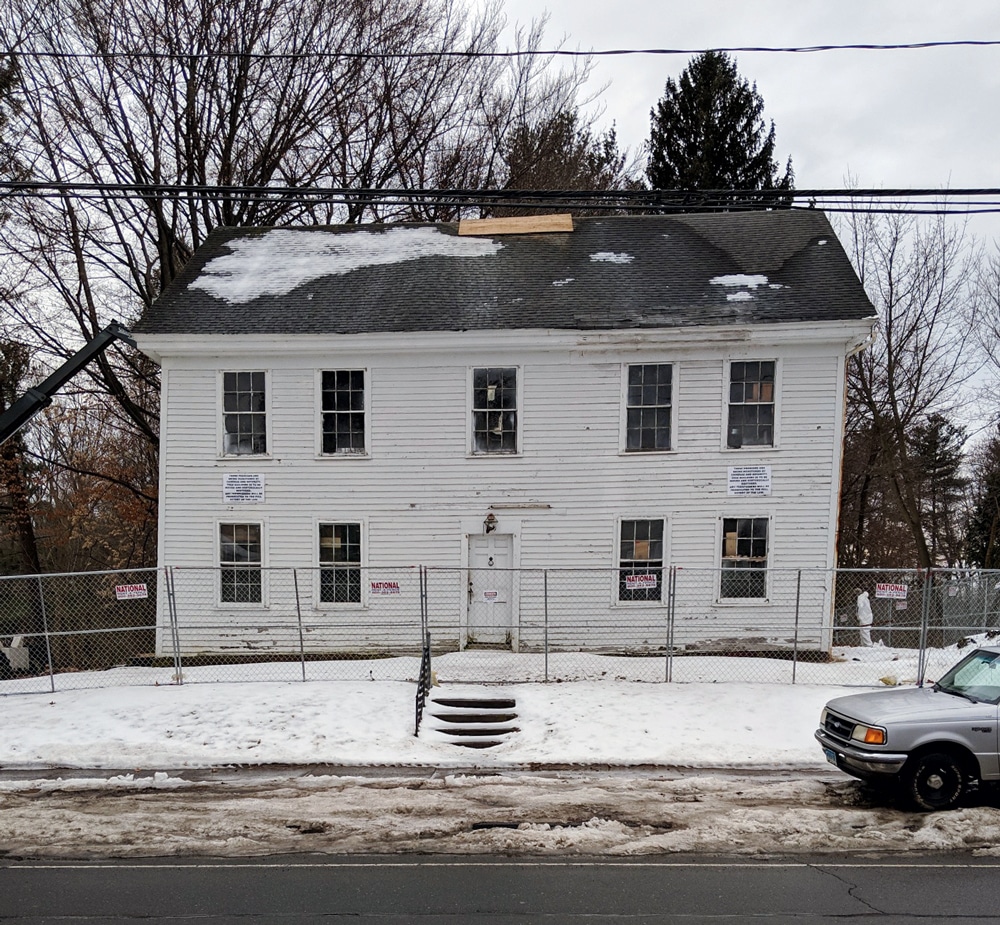 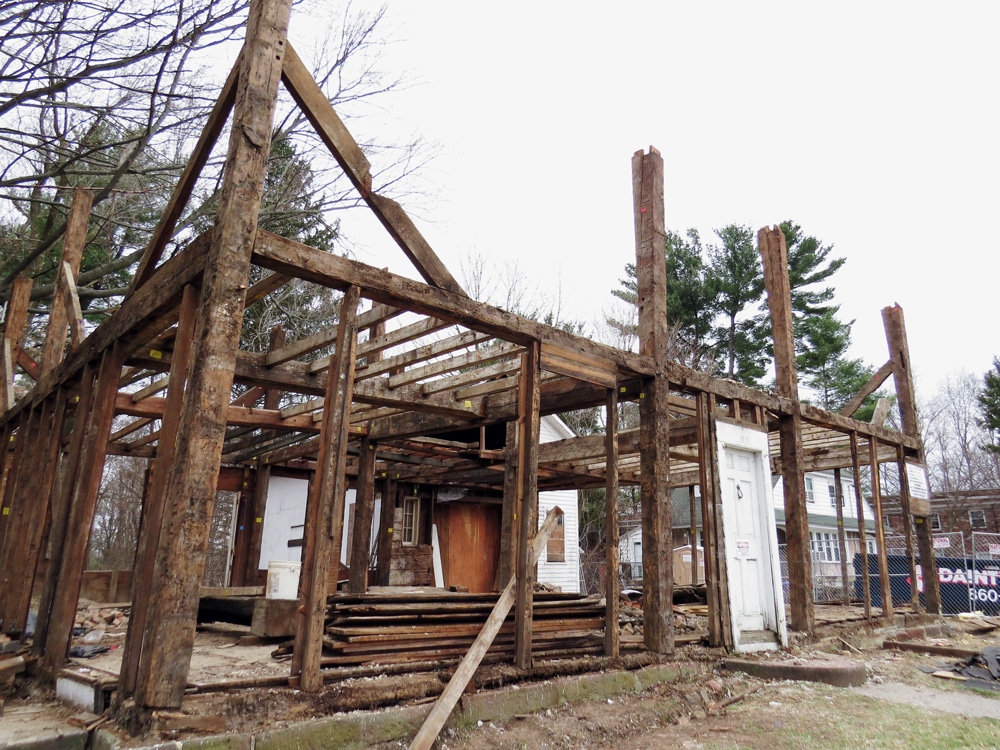 The house being dismantled for transport.

Piece by piece, the Hills House came down, with each component tagged and labeled for reassembly. Then it was shipped by flatbed truck to Georgia, where a brand-new foundation awaited. From a corner cupboard dating to 1742, when Captain David Hills enlarged the original 1693 house, to the main staircase and parlor fireplace, the house’s personality reemerged during reconstruction, guided in part by Bill Gould, his son Nate, and their crew. 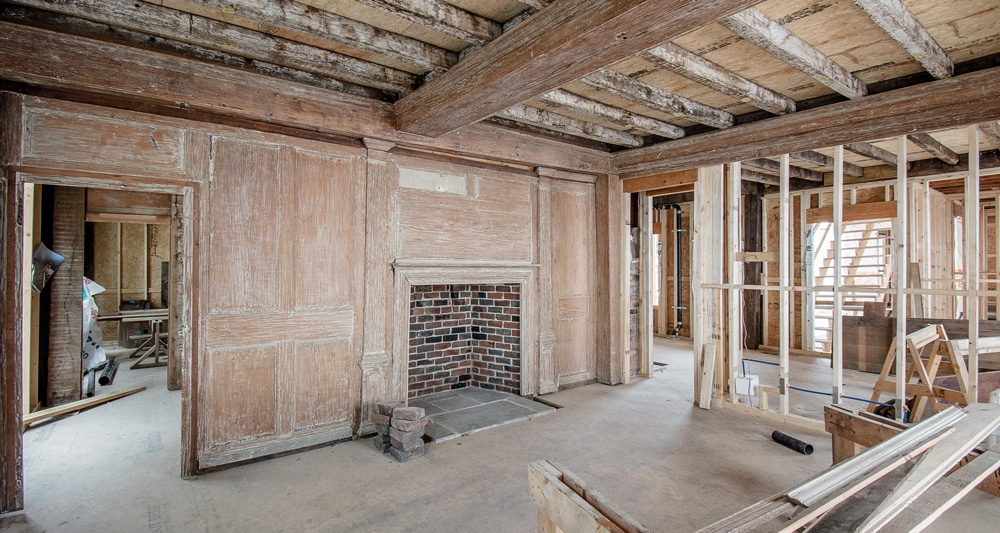 A look at the reassembly process in Savannah.

In its new life the structure will be called the Hills-Galloway House and be part of the current inn. “There are not many folks left that do what Bill does, and I am just happy we are able to learn from one of the best,” Galloway says. “Hopefully, we can do this again and help keep these exceptional buildings from rotting away, even if it is in a new location.” printmakersinn.com

Watch as judge reads out verdict of Derek Chauvin trial