How Short Should Ads Be?

Pie. Three little letters packed with warm, flaky comfort. Sweet or savory, pie releases good vibes with every slice, and now more than ever, we crave its handmade solace. That comfort gets a tactile boost when we can mix, roll, and clean up with beautiful, artisan-crafted tools. The following eight New England makers share their wares, plus a few tasty memories… 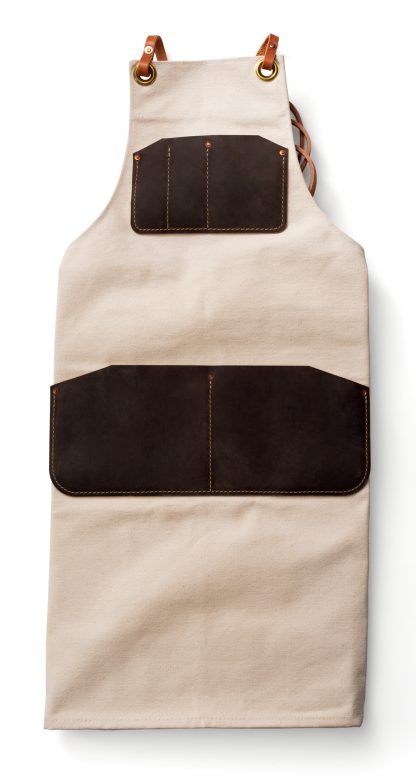 INSPIRATION: Drew’s studio is incorporated into Blackkat’s storefront, so visitors can watch as he works. When some coveted his work apron—albeit “covered in glue, dye, and paint”—it inspired him to create a version to sell. The rugged canvas body is custom-made by Steel Canvas in Massachusetts; leather pockets and shoulder straps add another level of durability.

BACKSTORY: In 2013, Drew saw an ad for a handmade leather travel bag in an in-flight magazine, “but the price tag was way more than I could afford, so I got the idea that I could try making it myself.” Three years later, his hobby became a full-time business. Cassandra, an architect, designed the Blackkat logo and maintains the website and social media. Roro, the titular black cat, still holds the role as company mascot.

ON PIE: “My mother is the true baker of the family—I have watched her make countless pies, so there’s still a chance I might pick it up someday,” Drew says. “Strawberry-rhubarb with vanilla ice cream is my all-time favorite.” blackkatleather.com 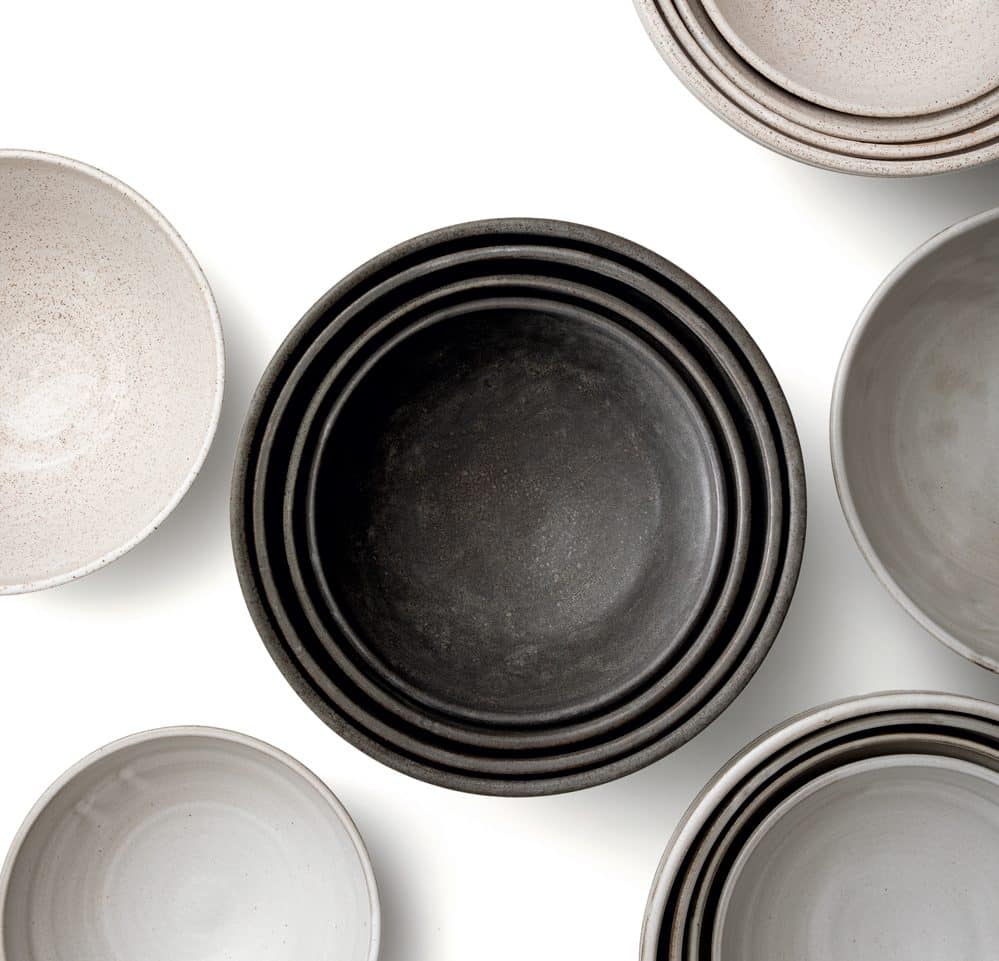 INSPIRATION: “Campfire is not only our name but a visual representation of our roots,” Kristen says of the couple’s “ceramic heirlooms”: ceramic bowls, plates, and mugs rendered in elegant charcoal and sandstone with earthy speckles. “A campfire is the oldest act of human gathering, which makes it the perfect symbol.”

BACKSTORY: From its 2015 debut at the Portland Farmers’ Market, Campfire Pottery has grown into a city storefront, plus a studio in a beautiful old mill on the Presumpscot River in Westbrook. “The Dana Warp Mill is a place for people to gather to learn how to craft ceramics. It’s truly a joy to create in this space.”

ON PIE: “I grew up on my mother’s Swedish apple pie, a recipe passed down from my grandmother,” Kristen says. “You slice up the apples in a pie dish, sprinkle sugar and cinnamon, and mix up this cobbler-like batter that gets poured over the top and baked into a delicious crisp-crusted top. With a healthy serving of ice cream—vanilla for sure!” campfirepottery.com 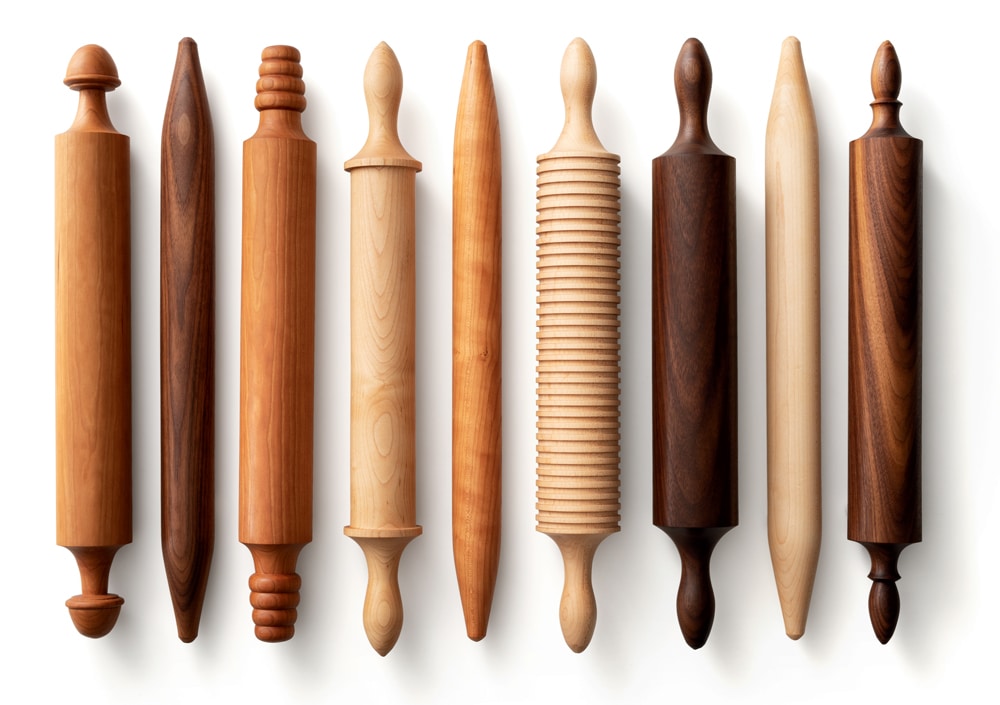 INSPIRATION: “We started making rolling pins in 2009 out of desperation” as the economy took a nose dive, Cyndi recalls. “We now have 29 styles in maple, cherry, and walnut. During this crisis, many people are enjoying their kitchens again, baking and cooking. We love that we can bring some comfort to these homes with our rolling pins.”

BACKSTORY: The couple had started out turning wood for architectural and furniture needs, but after they switched to making hand-turned rolling pins, a new business was born. Their 350-square-foot workshop, with views of the Green Mountains, is dominated by two lathes; some 1,500 to 2,000 rolling pins roll out of here each year.

ON PIE: “Ken makes the pins and I use them. I learned [pie making] later in life and am still learning. My newest discovery: To keep the crust from shrinking, freeze it when it is rolled out in the pie plate for at least 30 minutes prior to baking, and before freezing make sure you already have your decorative edges on your pastry,” Cyndi says. “I love so many kinds of pie, it’s hard to choose: lemon tart, berry, French silk, apple. We have an apple pie contest every October, and it’s amazing how many varieties of apple pie there are. We taste them blindfolded to make sure the visual doesn’t sway our taste buds.” vermontrollingpins.com 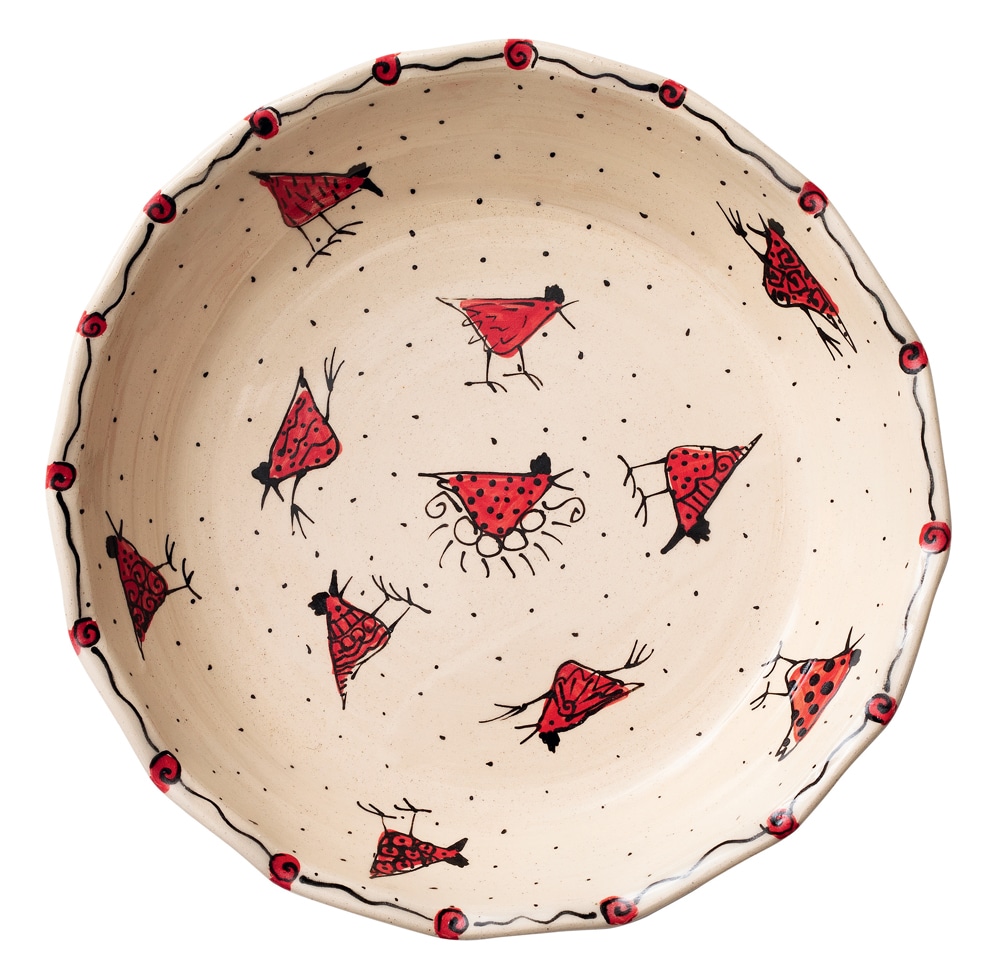 INSPIRATION: “My designs are inspired by my love for all animals, and the fact that I grew up on a farm and live on one now, with lots of wildlife surrounding us,” Robbi says. “I’ve had chickens for as long as I can remember. Right now we have a small flock of Araucanas, the Easter egg chicken. My style? Rustic and whimsical, a place where primitive meets happy-go-lucky. The chicken design was my very first one—it’s still a big favorite.”

BACKSTORY: “I opened my studio in 1988 when we moved to our farm in Windsor. For the first five years I was set up in our barn, in a really fun space between two old wooden silos. Finally, I made the transition to the ell in our 200-year-old colonial house, right off the kitchen, and paneled the walls with one-inch-thick pine from the local sawmill.”

ON PIE: “I love to make pie! My mother taught me—she is an excellent baker. My favorite is apple with a scoop of French vanilla ice cream. We have an apple tree in our front yard with the best pie-making Cortland apples.” On Facebook 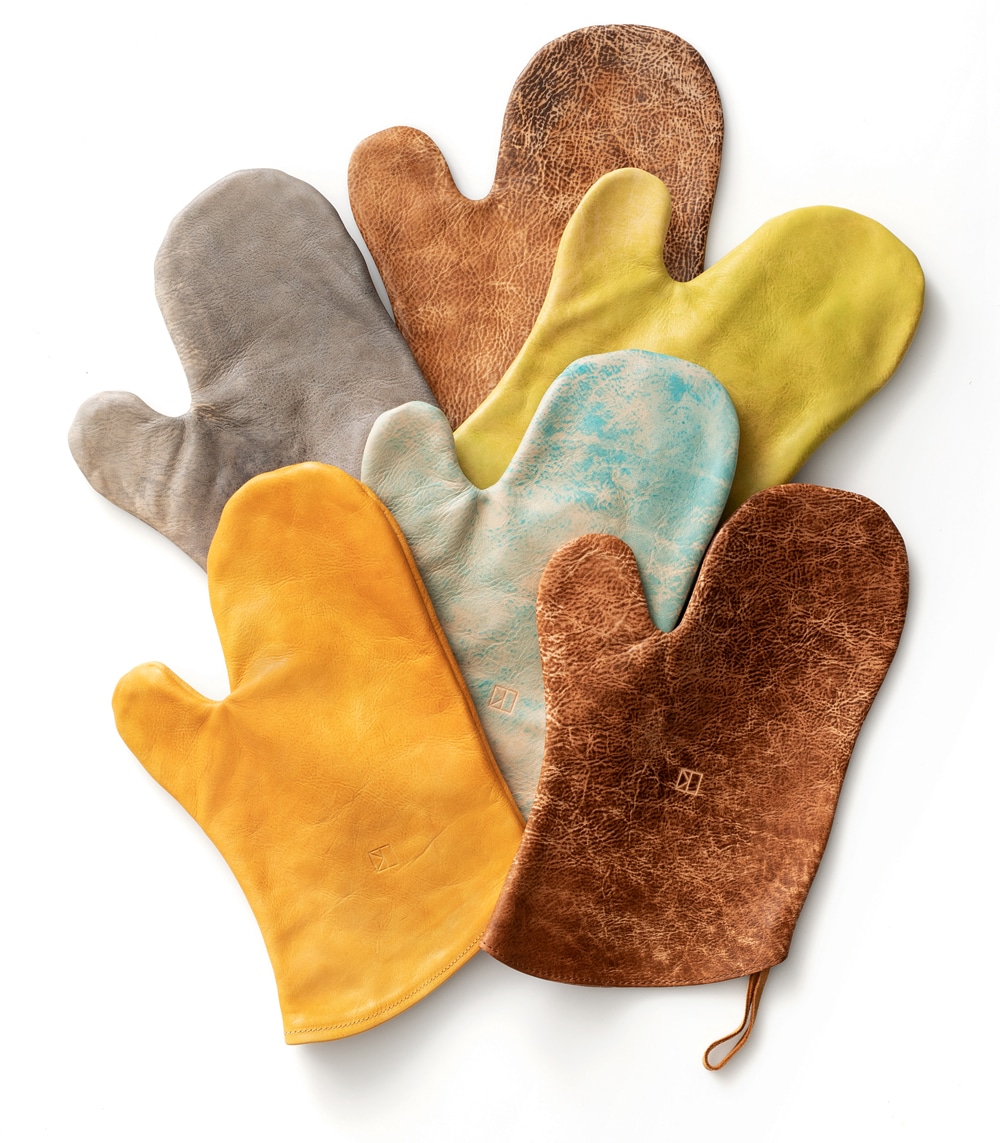 INSPIRATION: “I use mine daily,” Linny says. “[It’s been] the same pair for two years now, but I’m getting ready for a new color!” Next up: Italian leather mitts. “It really is the most beautiful leather I’ve ever seen. I found it in Milan last winter: full-grain vegetable-tanned leather hand-dyed using eco-friendly dyes.”

BACKSTORY: In 2010, Linny rode her horse, Sojourner, from L.A. to New Hampshire, with tack she made herself, settling into a studio in an old mill and polishing the leather-working skills she learned from her father. “Knife rolls are definitely what put my little business on the map, but as more and more foodies, chefs, and barbecue enthusiasts started following my work, it was a natural progression to making oven mitts.”

ON PIE: “The best pie I ever had was a chocolate macaroon pie baked by Kathy Knapp [then owner of the Pie-o-Neer restaurant], in a town actually called Pie Town. This was on my cross-country ride, and my horse and I had traveled about 700 miles. I tied Soj up outside this super-Western-looking café and sat exhausted on the front porch. After taking care of him, I went in and was fed this warm piece of pie with a hot cup of coffee, and possibly nothing has ever tasted so good. Food like that, on days like that, fills the soul like nothing else.” linnykenney.com 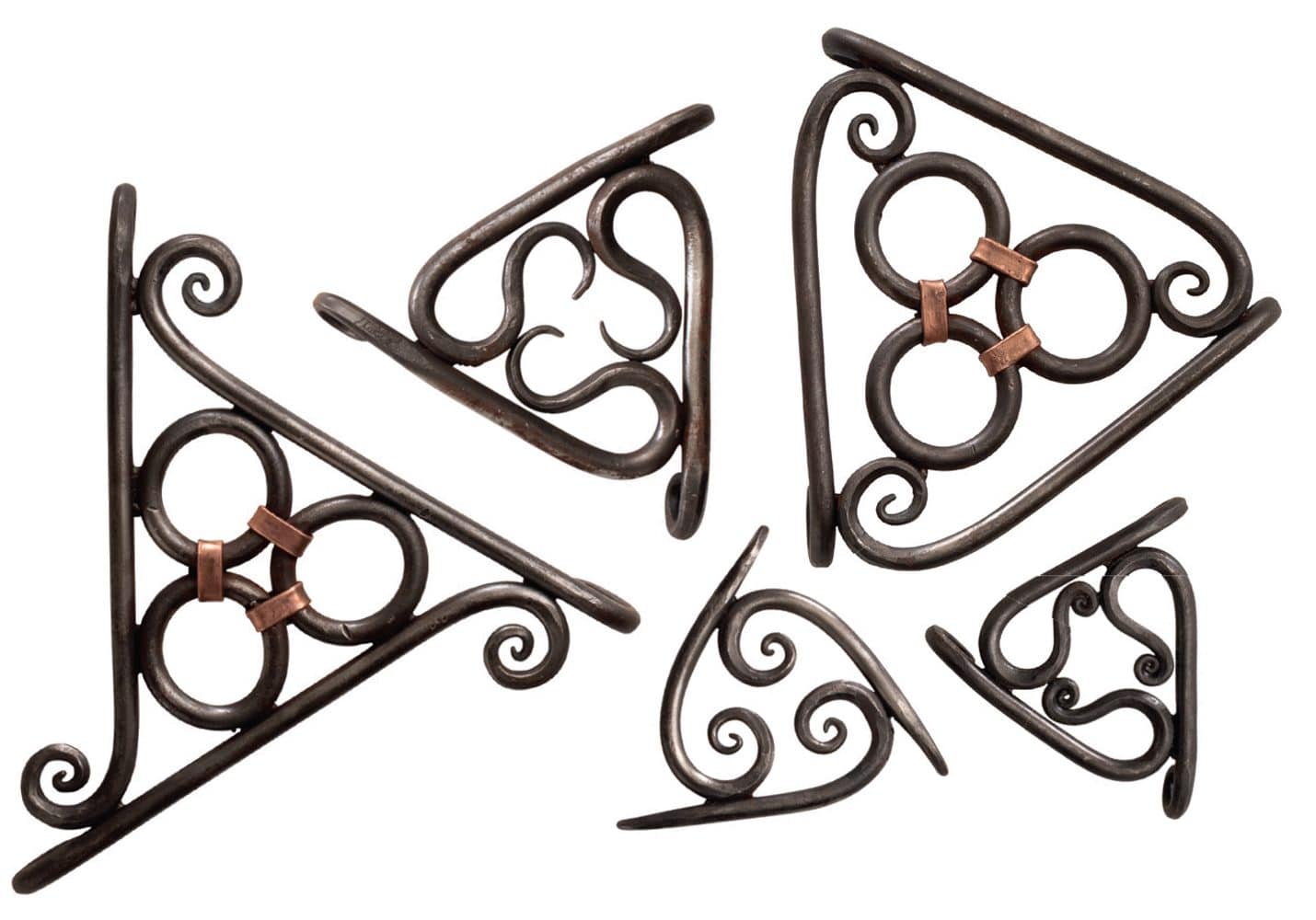 INSPIRATION: Nick says he started making trivets last summer, selling at crafts fairs across New England, and they sold out instantly. “They are one of my favorite products to make. I’m able to play a bit with the metal and try out different patterns and shapes. It’s one of the closest things to ‘sketching’ in metal that I can think of.”

BACKSTORY: Tucked into a 12-acre horse farm north of Portland, Wicks Forge was launched in 2012 shortly after Nick returned from apprenticing with a master blacksmith in Scotland. Despite his background in environmental conservation, he succumbed to the family passion: “I still have my great-grandfather’s anvil and work table, and I use my grandfather’s hammers every day.”

ON PIE: “I am the beneficiary of my family’s pie-making history,” Nick says. “My Aunt Madison is the current keeper of the pie tradition. Every Thanksgiving she makes three pies using my grandmother’s recipes: pecan with maple syrup, apple crumb, and pumpkin with graham cracker crust. My favorite is a plate with slices of all three. My favorite pie ever eaten was the first pecan pie I ate when I was 8 years old. It was Thanksgiving at my grandparents’. I had never had pecans or pecan pie before, so the pie was a bunch of brand-new flavors and sensations.” wicksforge.com

INSPIRATION: “The aesthetic [of serving utensils] … and the values that they hold around community, family, nourishment, the land, tradition, and ritual—these were so rich and close to my heart, so that is where I dove in,” Erica says. “All of the utensils have hit the mark, but the pie server is the most popular, for sure. I use it wherever I can—homemade berry pies, flipping eggs, homemade pizza. Give me another reason to use it, I’m there.”

BACKSTORY: “One of the first intrigues of becoming a craftsman was seeing so many old tools and machines in use in these modern times,” says Erica, a professional metal fabricator since 1994, who works out of a post-and-beam barn attached to an 1854 house in midcoast Maine. Five years ago, she started out making tools for building wooden boats, but then she quickly switched to serving utensils because “I was seeing such creativity in the local food movement.”

ON PIE: “I love making pecan pie every fall, crust and all, and learned it from my mom, and she from hers, and so on, back down the line of our moms,” Erica says. “In summer, my favorite is fresh-picked raspberry pie, served warm with vanilla ice cream. I’m lucky to have had some pretty good pies, but I need more!” ericamoody.com 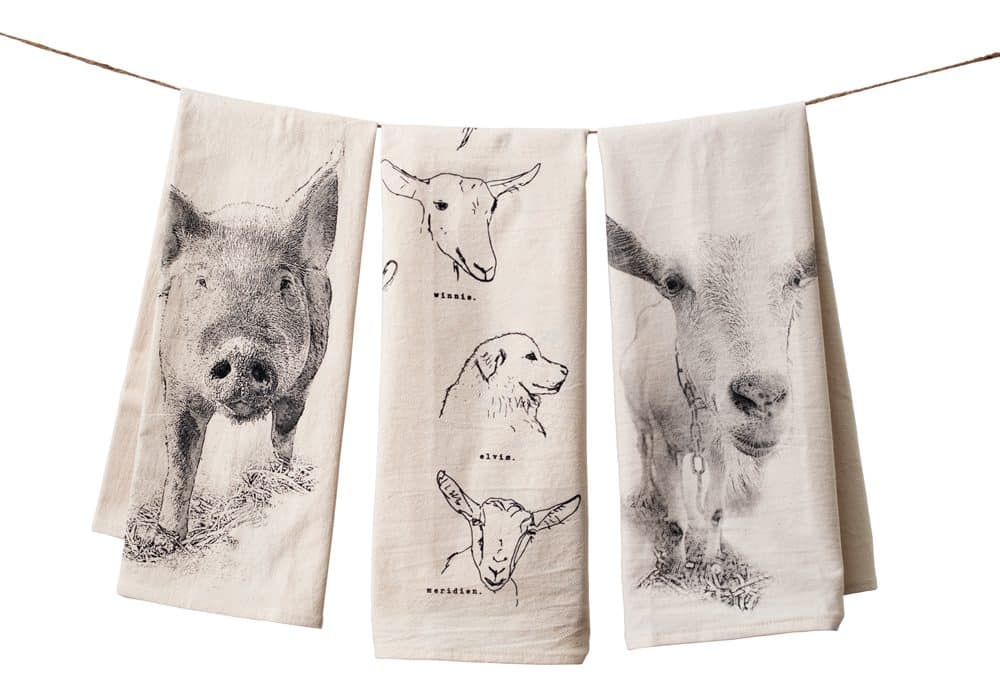 INSPIRATION: Big Picture Farm earned its name “because we wanted a farm that was rooted in a ‘bigger picture’ of sustainable agriculture, animal husbandry, being good employers, good neighbors, good citizens,” Louisa says. The tea towels she designed immortalize not only the farm’s first goat, Orion, but also subsequent generations, including Annabelle and Margot. “Our ‘All the Goats’ tea towel is probably the most popular.”

BACKSTORY: In what might be the ultimate in multitasking, Louisa and Lucas run a 40-goat dairy and farm stand confectionery, producing award-winning caramels, chocolates, and cheese, as well as creating tea towels, apparel, and accessories—all while raising young daughters Maisie and Minna. “We started with goat milk caramels and they are still our bread and butter,” says Louisa. “We used the milk of one goat, Orion, and went from there.”

ON PIE: “My mother makes tarts! We lived in France until I was 6, so she learned when we were over there. I stick to the more free-form galette. But the best pie was one we made this spring, with both my parents. The cherry tree we planted 10 years ago finally bore tons of fruit, so we had enough for several sour cherry pies. My mom made the crust; my dad, who grew up eating cherries in Michigan, made the cherry filling. Maisie and I did the eating.” bigpicturefarm.com

Shark and ray populations have dropped 70% and are nearing 'point of no return,' study warns