Is there a dancing bear in The Nutcracker? For most of the world, the answer is no. But thankfully, Boston is not the rest of the world. Meet the Boston Ballet Nutcracker Bear, and learn how it stepped into the spotlight.

The Nutcracker is often the very first ballet that the average American sees. Together with Swan Lake, it stands as a pillar of its genre, something upon which first-time viewers may make the decision as to whether ballet is something they’d like to see again. 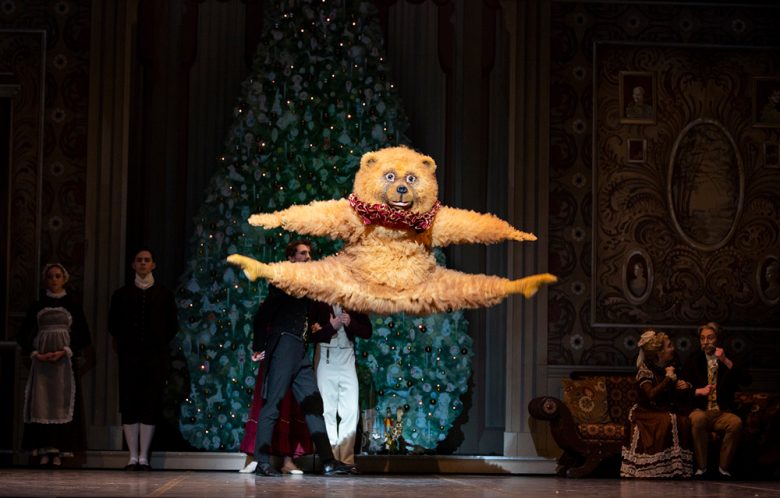 The Bear (here performed by Lawrence Rines) shows off its moves during the party scene in a Boston Ballet production of The Nutcracker.

Inspired by E.T.A. Hoffmann’s story “The Nutcracker and the Mouse King,” the two-act ballet made its debut in December 1892 at the Imperial Mariinsky Theatre in Saint Petersburg, Russia. Though not initially a hit, over the decades it became one of the most often performed and financially dependable ballets of all time.

The Nutcracker’s iconic status, however, has not stopped Mikko Nissinen, Boston Ballet’s artistic director since 2001, from putting his own spin on it. In updating the production, he wanted to create a Nutcracker that was “more technically difficult for our dancers and more exciting for our audience,” he has said. And most notable among his additions — at least for young audience members — is the Bear.

Night after night, audiences cheer the Boston Ballet Nutcracker Bear’s entrance during the family party scene and its bold performance full of leaps and spins. The Bear is, without question, one of the stars of the show.

A Brief Synopsis of The Nutcracker

The setting is a small German village on Christmas Eve in the 1820s. During a party at their parents’ home, young Clara and Fritz are entertained by their mysterious Uncle Drosselmeier, whose magic tricks, toy theater, and dancing figures (including, in Boston at least, a bear) leave them begging for more. When their uncle unveils his final wonder, the Nutcracker, Fritz is uninterested but Clara is intrigued.

Later that evening, Clara sneaks back into the living room to see the Nutcracker again, and she falls asleep on the sofa. Meanwhile, some of the creatures who live in the house have a party of their own, and Clara awakens to a room full of mice. Uncle Drosselmeier swoops in to rescue her, then magically transforms the Nutcracker into a life-size Nutcracker Prince, who leads an army of tin soldiers into battle against the Mouse King and his troops.

After defeating the mice, Clara and the Nutcracker Prince embark on a journey to a magical kingdom, where Clara meets the Sugar Plum Fairy and is presented with a crown of her own and entertained by dancers from around the world. Finally, Clara is guided back home, where she awakens again on the couch, wondering if it had all been a dream.

What Does It Take to Be the Boston Ballet Nutcracker Bear?

When the Bear debuted in the 1995 Boston Ballet production, it was in a costume by Emmy-winning designer David Walker. However, that original costume was made of satin Lycra, which was both heavy and hot, so while the look has remained the same, the materials have evolved. Boston Ballet’s manager of costumes and wardrobe, Charles Heightchew, has likened the current lining material to the lightweight, breathable mesh used in football jerseys.

For the audience, though, the wonder of the costume is the lush, realistic-looking “fur,” which is actually row upon row of tulle, the lightweight netting used in wedding veils and, of course, ballet tutus. Although it looks hefty, the costume weighs just 10 pounds.

Performing as the Bear brings its own set of challenges. Second soloist Lawrence Rines, who has performed as the Bear for more than a decade, has noted that the large head restricts the dancer’s vision, with small mesh holes near the nose and mouth allowing mostly a view of the floor. And since performing in a loose-fitting costume means that subtle body movements will go unnoticed, Rines and his fellow Bear performers have had to perfect motions and gestures that can be transmitted through all the tulle.

In addition to its star turn onstage, the Boston Ballet Nutcracker Bear is now in demand at business openings, holiday parties, and sporting events. It has essentially become the Boston Ballet’s mascot and one of its best ambassadors to the audiences of the future.

Have you ever seen the Boston Ballet production of The Nutcracker? Let us know in the comments below.

New for 2020: For the first time, Boston Ballet’s The Nutcracker can be enjoyed from home, thanks to a new one-hour video production. Here’s where and when to watch:

The video will also be available free on the Boston Ballet website for a limited time.

How Boston Got Its Christmas Tree | Holiday History

The post The Story Behind the Boston Ballet <i>Nutcracker</i> Bear appeared first on New England Today.

For China's Overburdened Delivery Workers, The Customer — And App — Is Always Right

How Europe can bypass Poland and Hungary’s vetoes