In the pastoral countryside of Sudbury, Massachusetts, sits a charming relic of the colonial past. Having begun life as a modest, two-room family residence in 1707, and officially becoming a working inn by 1716, Longfellow’s Wayside Inn has survived and flourished in its nearly three hundred years of hosting guests and travelers. Originally known as Howe’s Tavern, this quaint inn was made famous when Henry Wadsworth Longfellow employed it as the setting for his book of poetry, “Tales of a Wayside Inn” in 1863. 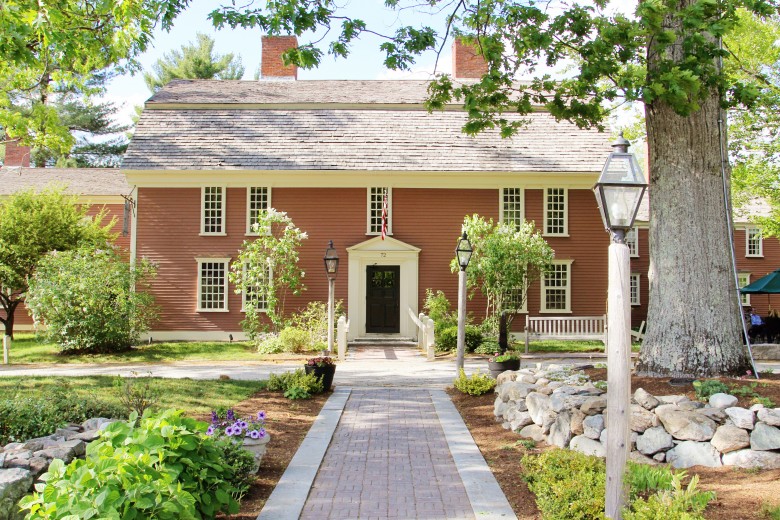 Had it not been for Longfellow, the old inn might never have come to the attention of Henry Ford, the billionaire founder of the Ford Motor Company and admirer of Longfellow, who purchased the property in 1923. Restoring the inn and land to their former tranquil glory, his goal had been to turn it into a living history museum, adding a grist mill, old red schoolhouse, chapel, and more, thus saving the land from modern development. Due to these series of well-timed redemptions, the Wayside Inn has survived to become the oldest operating inn in the United States today.

However, it is not just its age and history that imbues this beautiful inn with legitimacy, but also its tales of the Wayside Inn ghost. For what New England inn worth its salt, does not come with its own haunting tales, real or imagined? Though skeptics may chuckle, the mystery of things that go bump in the night seems to hold a unique appeal for believers and non-believers alike. Considering that at the heart of most rumored hauntings is a tragic and mysterious story, it’s little wonder that they intrigue so many of us, and the ghost story of the Wayside Inn is no exception. 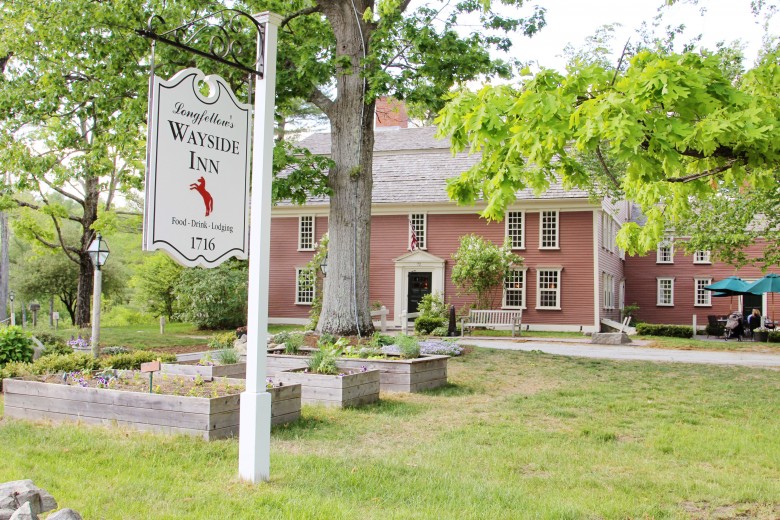 An official inn and tavern since 1716.

I visit the Wayside Inn as often as I can, usually to take in the ambience of the old bar room, which is part of the original house, or to eat a meal in one of the cozy dining rooms. So far I have yet to encounter any visitor from the spiritual realm. Instead, I am always met with a warm, welcoming atmosphere, as I whittle away the hours among friendly patrons and staff. 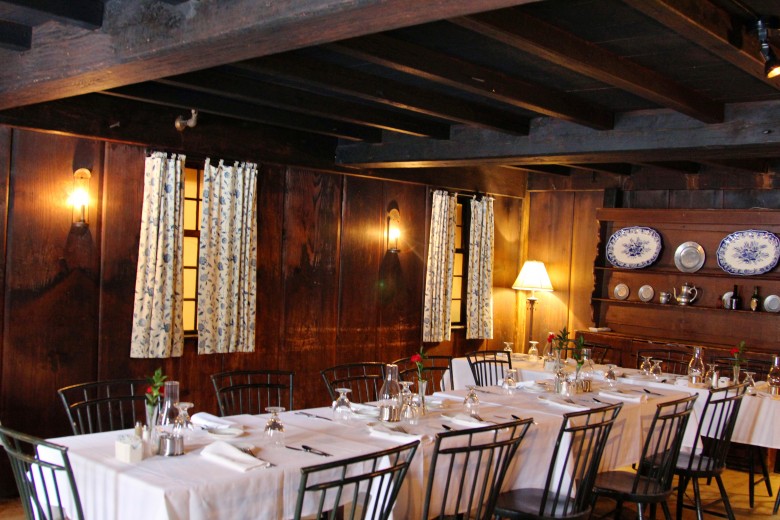 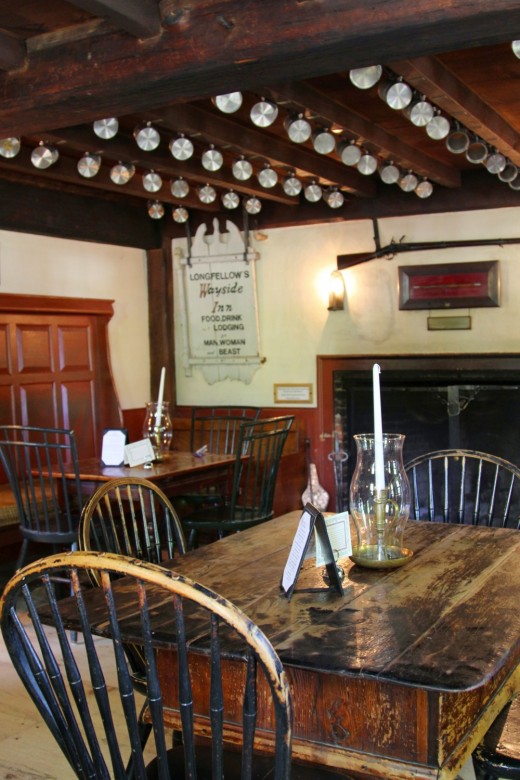 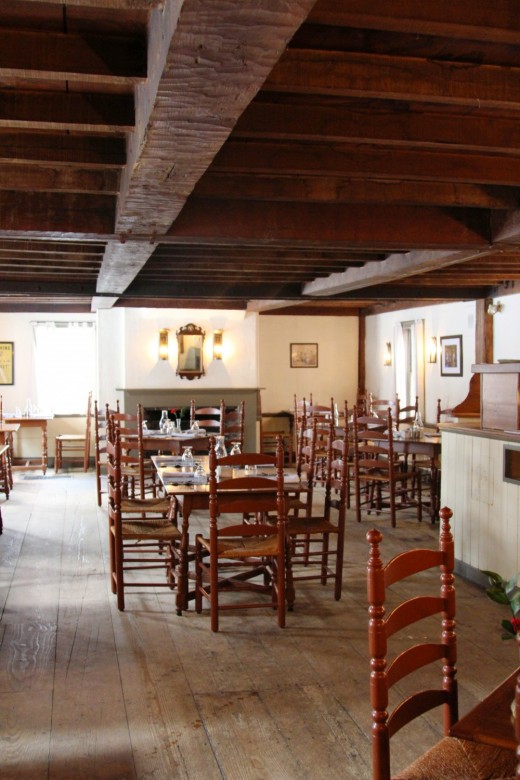 The tap room was once the private kitchen and dining room of the Howe family.

On a recent visit, however, I came specifically to hear the story of Jerusha Howe, the reputed Wayside Inn ghost. The inn had been built by the Howe family and was handed down through four generations. Jerusha’s brother, Lyman (known as “the squire”), was the last in the line of the Howes to run the inn. The Howe’s innkeeping legacy ended with Lyman, since he never married or produced an heir by the time of his death in 1861.

As a young woman, growing up in the inn, Jerusha was known as “the belle of Sudbury” and her musical and artistic skills were renowned. She famously owned the first piano in town and put it to frequent use for visitors. Some say she still puts it to use today, with ghostly tunes played in the middle of the night. 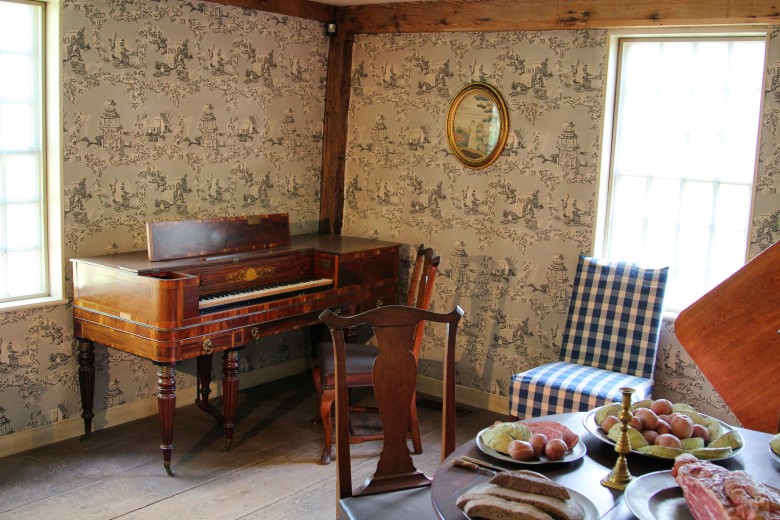 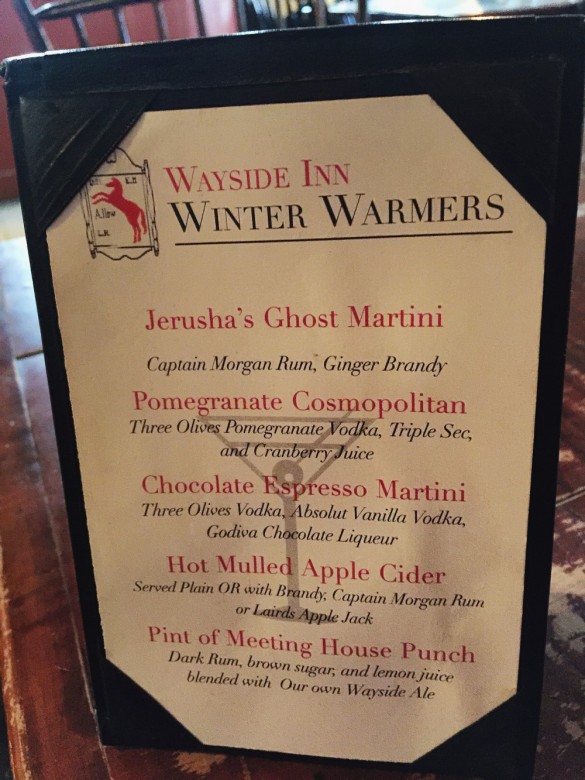 The bar room menu does not shy away from rumors of famous ghost.

Little is known of Jerusha’s romantic affairs in life, but as the story goes, she was engaged to an Englishman. The legend claims that he sailed home to England to make arrangements for the wedding, and was never heard from again. There has been speculation that he drowned at sea or he simply abandoned her, and perhaps he never existed at all, but no matter the truth of story, Jerusha chose to never marry. She lived out her days at the inn by her brother’s side, dying at the young age of 45 in 1842. Of course, as is the case in the best ghost stories, it is said she died of a broken heart.

Jerusha is believed by many to be spending much of her afterlife in the bedroom she used during life, room 9. The room dates back to the late 18th-century, and I found its rustic charm warm and inviting. The nostalgia of a simpler time can be a little haunting, and perhaps unnerving, to those who haven’t spent much time in an old house. Each little nighttime creak and thump may take on a more ghostly form in one’s mind when in an old and unfamiliar place.

Some guests in room 9, and also in room 10, have reported smelling Jerusha’s citrus perfume or feeling her sweep past them on the stairs. There have even been claims of being awakened by her touch or seeing her presence at the foot of the bed. Whether these nighttime occurrences are real or frights conjured by the imagination, the room is charming and would be a thrill and pleasure to stay in for those intrigued by history and the legends of the Wayside Inn ghost. 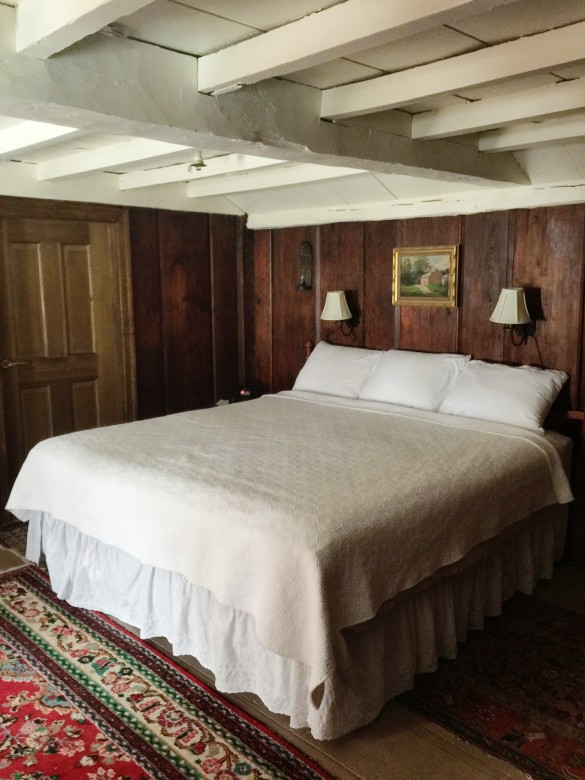 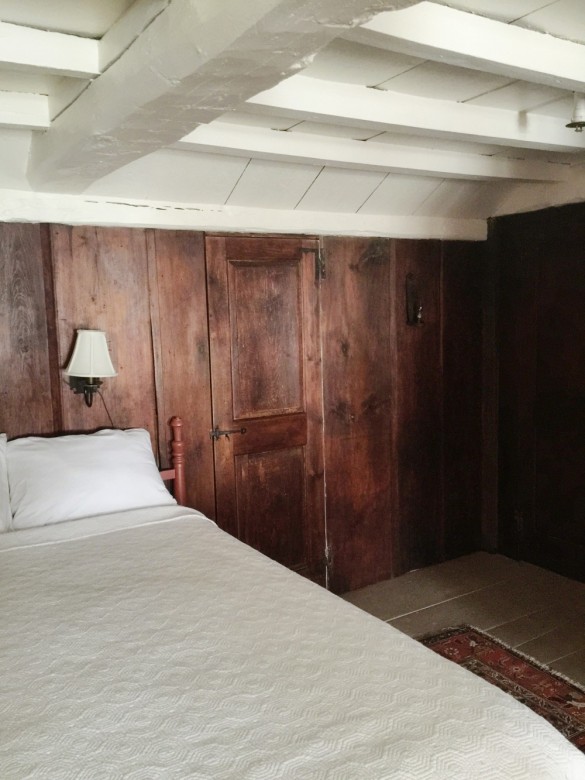 The old, colonial hardware remains on the doors, adding to the room’s character. 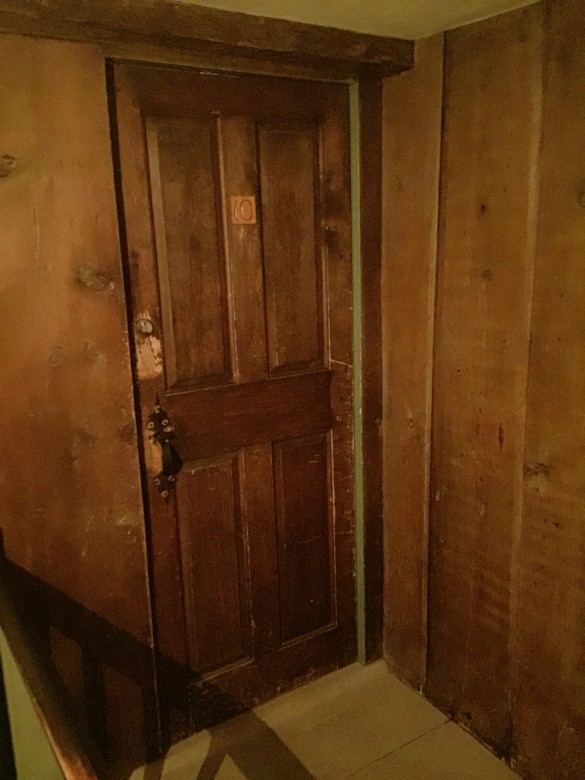 The door to room 10, Jerusha’s other alleged “haunt.”

An odd and unique custom has developed over the years at the Wayside Inn, which is referred to as the Secret Drawer Society. Little notes, usually reporting on any Wayside Inn ghost encounters or lack thereof, are stuffed into little cracks, crevices, and drawers all throughout the room. Some of the notes, plucked from their hiding places, go back decades. Often guests will spend hours searching the room and reading the secret testimonies of those who have come before. 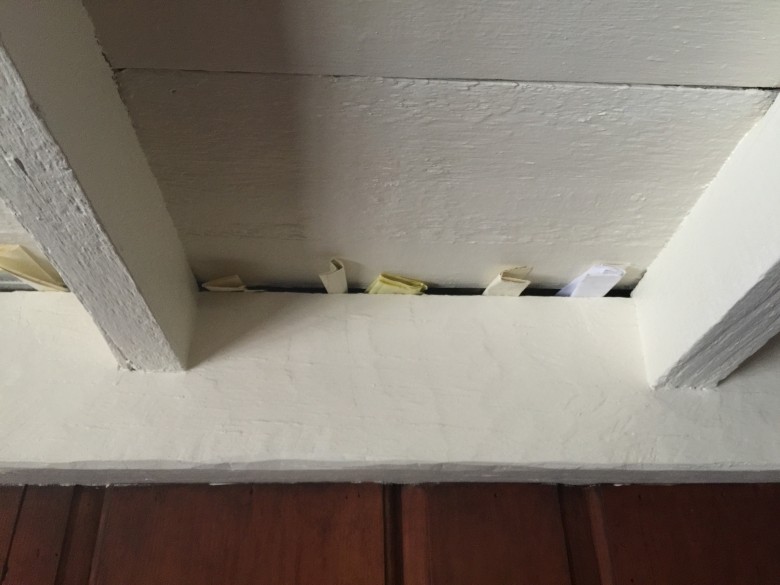 If some essence of Jerusha still resides at The Wayside Inn, she never appeared or made her presence known to me. When I left Longfellow’s Wayside Inn that day, I remained undecided on the alleged haunting. However, I did learn more about this mysterious woman from the 19th century, who was smart, talented, and refined. I learned of a competent woman, who despite a reportedly weak constitution and a possibly broken heart, ran an inn alongside her beloved brother, Lyman, with a smile on her face and a determination to please those around her with music and art. I learned of her fierce love for her family and her appreciation for education. Though her accomplishments were ordinary, I delighted in getting to know her. The mystery of her British fiancé may never be solved and questions of her continued presence will remain with every floor creak and phantom smell at the old inn, and in that way, at least, she will have achieved lasting notoriety and immortality.

Haunted or not, Longfellow’s Wayside Inn is a special, historic treasure with an atmosphere that keeps guests, myself included, wanting to come back for more. If Jerusha is indeed the Wayside Inn ghost, I don’t blame her for never wanting to leave. 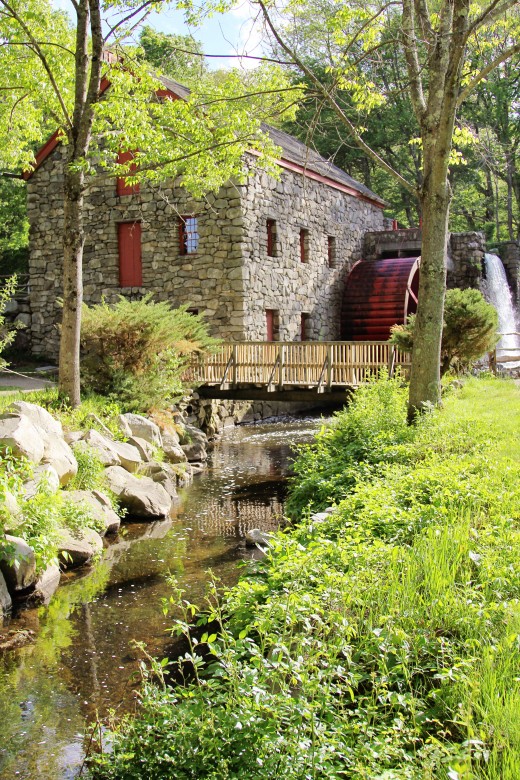 The grist mill on the Wayside Inn property

"A great deal of ruin"