There are certain things that people in New England (and other cold climates — we see you, Minnesota) are known for doing that might make our southern and western neighbors shake their heads and sigh. We all know the person who only stops complaining about the bone-chilling temperature to take a sip of iced coffee, or the skier who’s on the slopes even when his pipes back home are frozen. We all know the family that has a yearly tradition of jumping into a freezing body of water — for fun — and every year many of us sit at home and applaud (or judge) the brave souls at the wintertime Patriots games, somehow still able to see Tom Brady through the wall of their own breath. Some of these behaviors may seem crazy, but they must work for us, because almost every New Englander (admit it!) has muttered on a sweltering August day, “I’m so ready for winter.”

All New Englanders during a snowstorm.

Contrary to what many movie thrillers would have you believe, a New England Dunkin’ Donuts employee knows that when someone enters the store in a face mask, it’s because the temperature outside is zero degrees and this patron is geared up for an iced coffee. In fact, here’s a proposed assessment of New Englanders’ resiliency: Have a Dunk’s employee tally how many people per day slide into the drive-through in a full parka with the heat blasting and proceed to order a refreshing coffee filled to the brim with ice cubes. New England is known for its hardy natives, and what the rest of the country doesn’t know is that wintertime iced coffee is actually a challenge: The higher the ice-cube-to-outside-temperature ratio, the stronger you are. 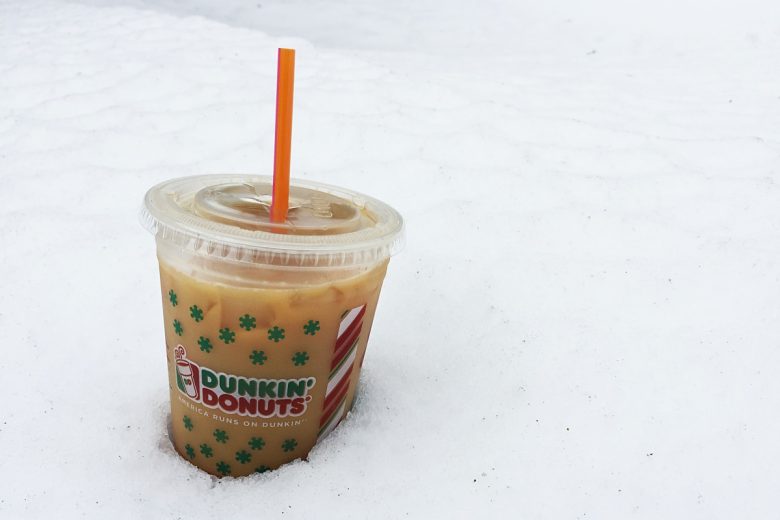 The New England way to keep an iced coffee cold.

We’d guess that the practice of meditation was created by a cold New Englander on a ski lift. Nothing tests one’s mental capacity for tolerating negative temperatures quite like slowly moving up a mountain into negative-r temperatures. And, as is skiing tradition, the lift will usually have to stop at least once for a skier liftoff mishap, leaving you dangling somewhere mid-mountain, praying to the ski gods that it was just a lollygagger at the base of the mountain and not a full-on “tried to get on the lift, somehow lost both my skis and a left mitten” situation. Or, worse, you’re within spitting distance of the summit, all exposed skin being ruler-slapped by the wind, and the creak of the lift coming to a stop kicks in. At that point you might even glance down and consider Superman-ing it onto the slope (per common sense, not a good idea). 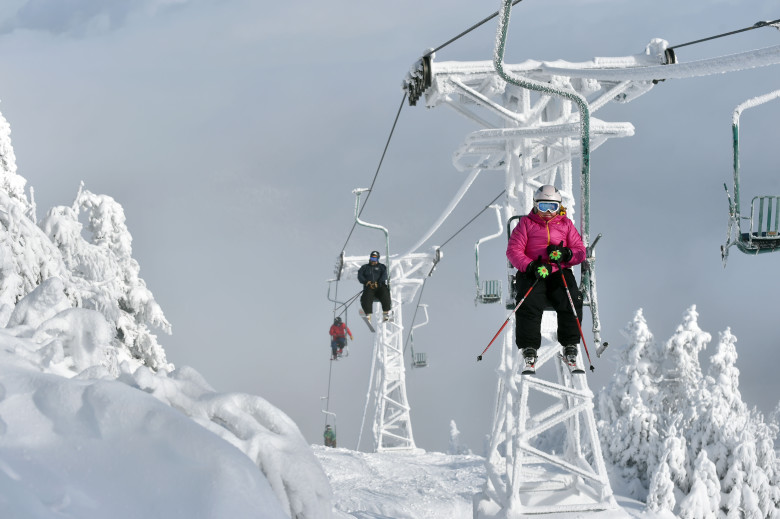 A bundled-up skier on the iconic single-chair lift at Vermont’s Mad River Glen.

New Englanders know that winter precipitation today means ice rink tomorrow. Sure, it sounds a bit magical – all Olympic skaters started on a frozen driveway puddle, right? Well, not so much, because it’s less like the smooth and sparkly stuff that Elsa from Frozen conjures up (cue the soundtrack), and more like frozen Chex mix (crunchy, salty, impossible to get rid of). But New Englanders also know that when a winter storm barrels through — because they’re watching, intently, for weather-related conversation topics to have with people in the grocery store line — they’ve got exactly 60 minutes to doff those pajamas, slide on the knee-high heavy-duty waterproof boots with alpaca liners and quarter-inch spikes, armor up, and shovel that driveway. Shovel. That. Driveway. 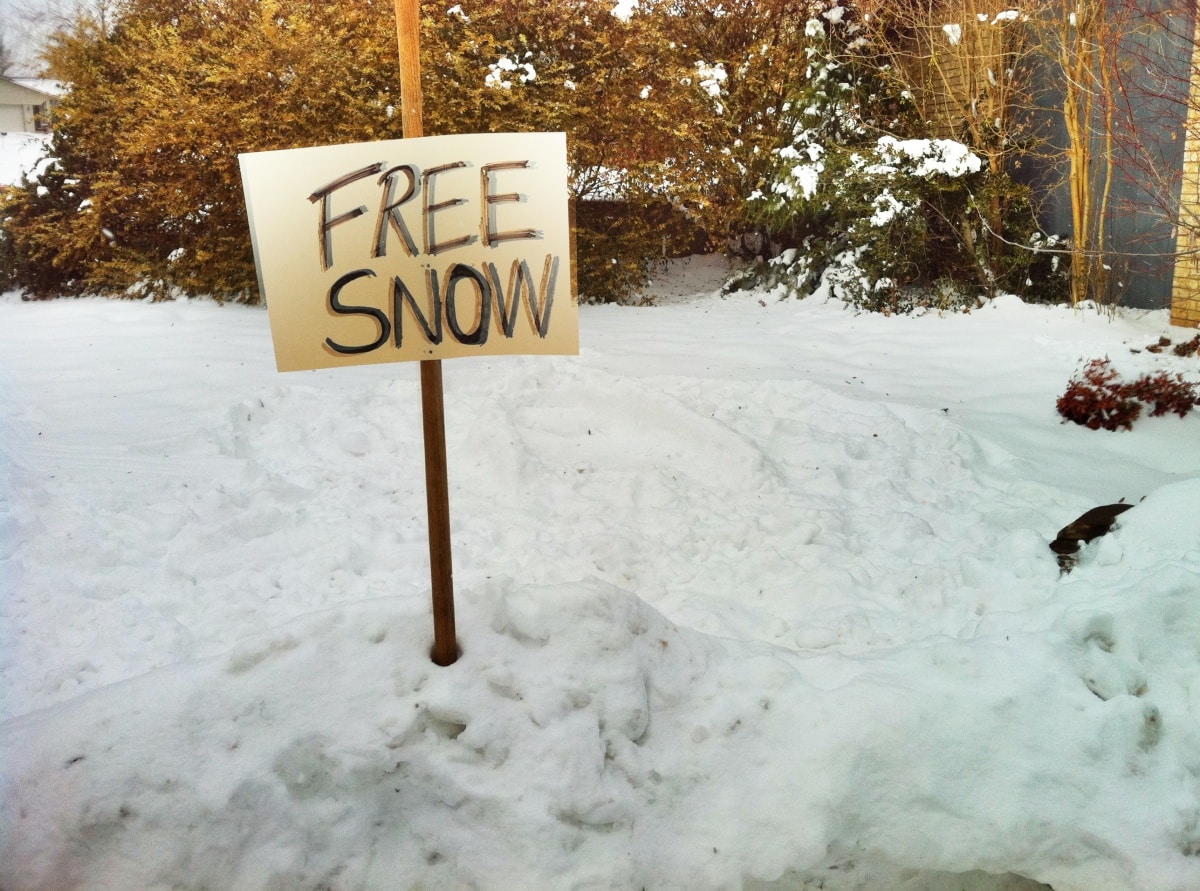 Someone got tired of shoveling.

Fellow New Englanders, stop and think for a moment how many times you’ve seen, read, or participated in some sort of event that involves stripping down to your skivvies in freezing temperatures and hurtling yourself into even-more-freezing water. It’s a startling number of times. New Year’s Eve: Because nothing says “New Year, new me!” like every nerve in your body actually screaming at you to reconsider a decision. Family time: Fellas, revealing your family’s tradition of pond dipping on the coldest day in January is catnip to a New England girl — cue the wedding bells (or better yet, forget the formal event and sanctify that union with another arctic plunge). And charity: We fully support this. Whatever it takes — as is the New England way.

When Bill Belichick upgrades from sleeveless hoodie to full winter jacket, you don’t need to check the thermometer. It’s cold. But not cold enough to keep Patriots fans from packing the stadium, even if it involves layering up in an entire closet’s worth of coats, hats, gloves, socks, and goggles. Hang out in Foxboro on any given winter game day, and you’ll see New England’s very own “march of the penguins”: a mass of wooly blobs of red, white, blue, and silver waddling their way toward Gillette Stadium, ready to watch their team win no matter what the thermometer says (as was the case with the Pats’ 26-6 win over the Jets on December 31, 2017, which — at 13 degrees with -10 degree wind chill — broke a 40-year record for coldest regular-season home game ever). 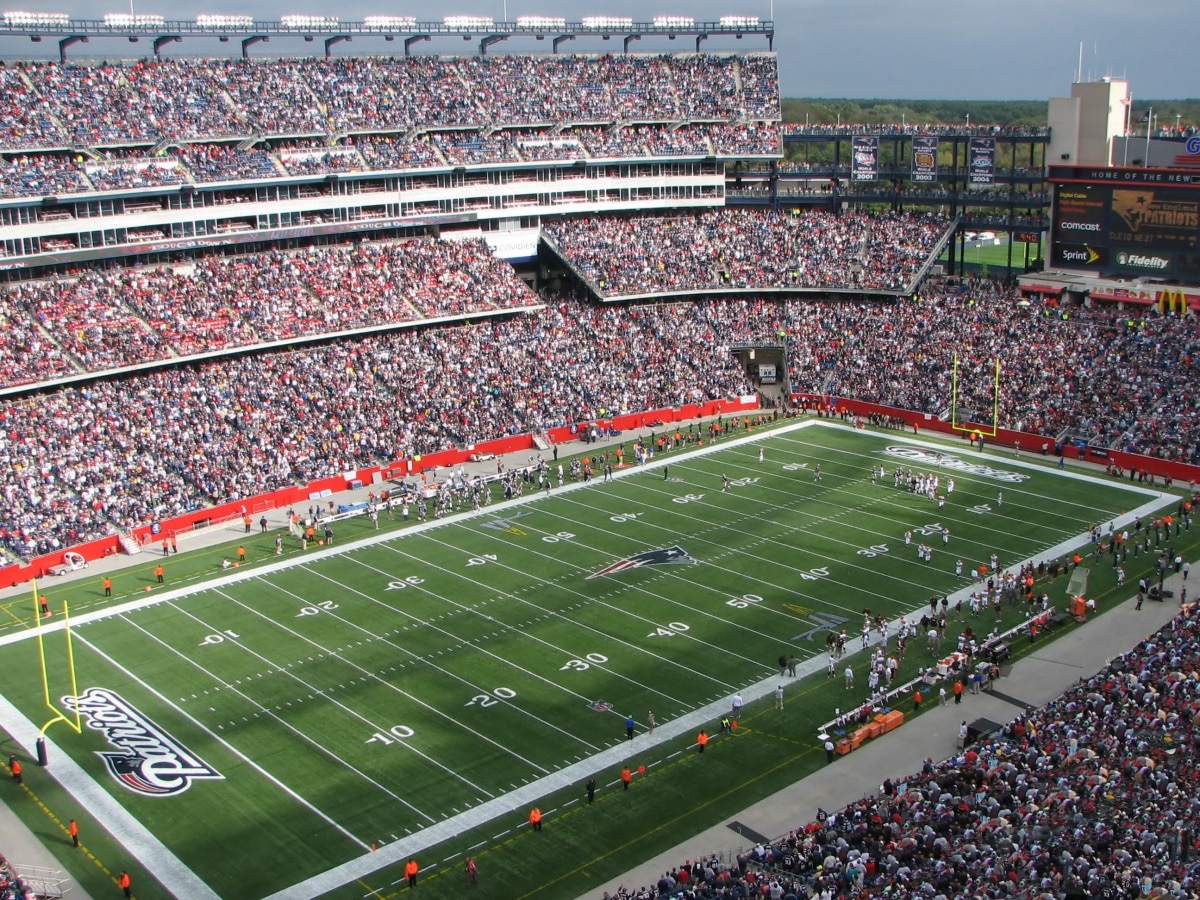 Pets are generally thought to be easier to raise than babies — but imagine if babies required us to take them out into arctic temperatures and knee-high snow on a regular basis. We sacrifice a lot for our little (or big) Buddys, Bandits, Benjis, Gingers, and Fidos, and never is that more true than during a long New England winter, when owners find themselves shoveling paths specifically for their dogs, wading out to the end of that path to pick up the “treasures,” and bundling up morning and night to take their furry friend out for some exercise. Not to mention the gear required: vests, socks, hats, sweaters, jackets — and that’s just for the dog. It’s only a matter of time before Fido is sporting little L.L. Bean booties (they’re called duck boots, so who’s to say dog boots aren’t next?). 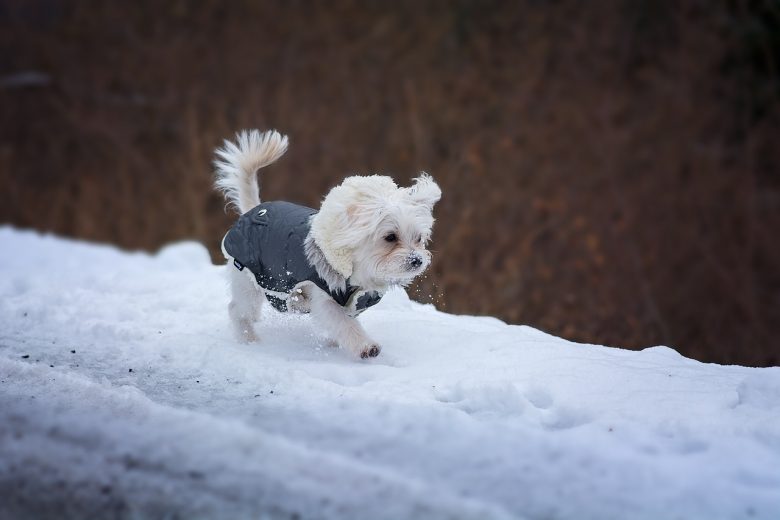 This little dog is ready for the snow with its winter jacket.

There are certain times in life that necessitate libations: A beautiful summertime Tanglewood concert. The moment you snag an elusive six-pack of Tree House beer. Being single during the holidays. And, most important, ice fishing. Because if you’re going to sit in a glorified igloo over a hole in the ice and wait for a bobber to jiggle because a fish has finally gotten sick of watching us poor humans shiver and decides to finally snack on that bait, you’re going to need some of that sweet, sweet fermented nectar to keep you warm and, probably, sane. While in fact there’s a real art and science to successful ice fishing, the patience and the good circulation required to participate in the activity are limited to the most resilient of New England anglers. 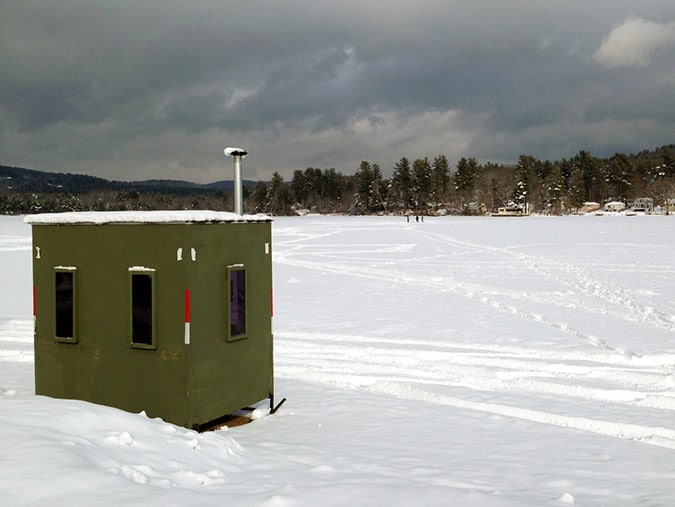 In the age of social media, it’s all about getting the right shot, even if it means sacrificing one’s sense of hygge. The Cape Porpoise lobster trap tree on a December night. The view from the summit of Okemo Mountain on a chilly ski trip. Pulling over and exiting your warm car for a shot of the Kancamagus Highway. Any and all New England lighthouses, as the salty seaside “breeze” dissolves your exposed skin. A coveted shot of sea smoke when cold air moves over warmer water. There are limited reasons why a New Englander would willingly expose his phalanges on a brisk winter day, but we bet that getting a perfect shot to show your Uncle Ricky, your hairdresser, or your 500 social media friends often tops the list. In fact, perhaps the invention to follow duck boots for dogs is a down-feather phone case, lest we behold the next great New England social media blackout, when all our phones and cameras collectively give up. 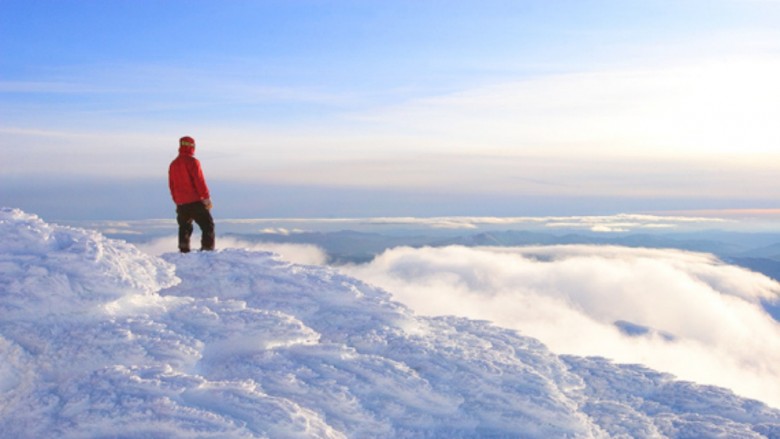 WHY? BECAUSE WE CAN

All joking aside, there’s a reason that there’s such a thing as a New Englander. Yes, winter in the Northeast can be tough, but it’s also a magical chance to see our landscape and environment completely transform four times a year. While a consistently sunny climate is perfect for some, we live for the beautiful challenge that is winter. We drink iced coffee because the cold doesn’t faze us. We willingly endure a ski lift because sailing down a mountain on that white powder provides a freeing sensation like no other. We dive into the ocean for 10 seconds because year after year of surviving a New England winter provides us with a sense of resiliency — we know we can handle it. We sit in Gillette Stadium because we’re a dedicated clan of fans. We rip off our gloves to take photos because a New England winter is stunning. And we shovel because, well, we’ve got to escape the confines of our driveways somehow.

The post Ways to Embrace the Cold That Are Normal Only for New Englanders appeared first on New England Today.